(No racial pun intended...at least I don't think it was, since that would be so very un-PC 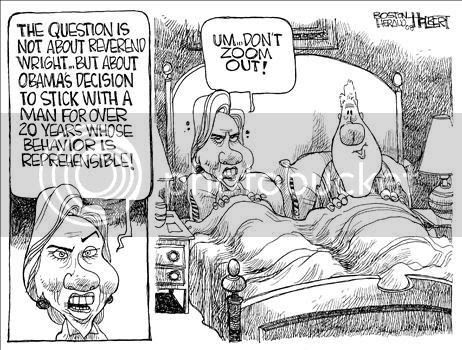 Does he not see the moral difference between the occasional private expression of the prejudices of one's time and the use of a public stage to spread racial lies and race hatred?

....But Obama was supposed to be new. He flatters himself as a man of the future transcending the anger of the past as represented by his beloved pastor. Obama then waxes rhapsodic about the hope brought by the new consciousness of the young people in his campaign. Then answer this, Senator: If Wright is a man of the past, why would you expose your children to his vitriolic divisiveness? This is a man who curses America and who proclaimed moral satisfaction in the deaths of 3,000 innocents at a time when their bodies were still being sought at Ground Zero. It is not just the older congregants who stand and cheer and roar in wild approval of Wright's rants, but young people as well. Why did you give $22,500 just two years ago to a church run by a man of the past who infects the younger generation with precisely the racial attitudes and animus you say you have come unto us to transcend?

Instead of being a 'vessel of redemption', the uninsightful and extremely conflicted Obama is going to excacerbate the racial divide, rather than heal it. It has already started. Forgive him, he knows not what he does. He's just another political pot-- a pot with a modicum of rhetorical brilliance yes--but just a pot, after all.
Posted by Dr. Sanity at 9:19 AM