THE DIALOGUE ON RACE BEGINS 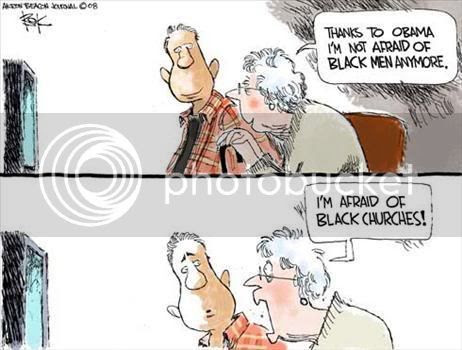 ...and it goes downhill from there.

The inimitible Christopher Hitchens has this to say about the two most memorable aspects of Obama's 'historic' speech:

You often hear it said, of some political or other opportunist, that he would sell his own grandmother if it would suit his interests. But you seldom, if ever, see this notorious transaction actually being performed, which is why I am slightly surprised that Obama got away with it so easily. (Yet why do I say I am surprised? He still gets away with absolutely everything.)
[...]
But is it "inflammatory" to say that AIDS and drugs are wrecking the black community because the white power structure wishes it? No. Nor is it "controversial." It is wicked and stupid and false to say such a thing. And it not unimportantly negates everything that Obama says he stands for by way of advocating dignity and responsibility over the sick cults of paranoia and victimhood.

That same supposed message of his is also contradicted in a different way by trying to put Geraldine Ferraro on all fours with a thug like Obama's family "pastor." Ferraro may have sounded sour when she asserted that there can be political advantages to being black in the United States—and she said the selfsame thing about Jesse Jackson in 1984—but it's perfectly arguable that what she said is, in fact, true, and even if it isn't true, it's absurd to try and classify it as a racist remark.

You know, I don't think I am ever going to grow tired of this brouhaha or the 'healing' dialogue it spawns --particularly since it fully exposes for all to see the complete and total intellectual and moral bankruptcy of both the Democrats and the political left.

Let's see...how many Sundays are there between now and November ?
Posted by Dr. Sanity at 7:30 AM