Here's the way the defense works:

I predict Obama has bequeathed to us a new lexicon, a novel way to explain away racist outbursts.

Obama has sanctified the doctrines of moral equivalence (the private racial slight is balanced by the televised public hatred; everyone has a pastor in some ways like Wright, etc.) and contextualization (you must understand Wright's context and background; the good that he does; the protocols of the black church, etc.). The result is a lowering of the bar for the next racial outburst, since the perpetrator will immediately resort to the Obama defenses. And since we now know that Obama heard some of these "controversial" Wright sermons and did not object, we can see that his earlier, once just condemnation of someone like Imus — like many of his initial defenses of Wright—may now be inoperative:

"I understand MSNBC has suspended Mr. Imus. But I would also say that there's nobody on my staff who would still be working for me if they made a comment like that about anybody of any ethnic group. And I would hope that NBC ends up having that same attitude. ... He didn't just cross the line. He fed into some of the worst stereotypes that my two young daughters are having to deal with today in America. The notions that as young African-American women — who I hope will be athletes — that that somehow makes them less beautiful or less important. It was a degrading comment. It's one that I'm not interested in supporting." (October 2007)

The new sophistic Obama, however, would recount to us all the charity work and good that Imus had once done and still does, that we don't understand the joshing of the shock-jock radio genre that winks and nods at controversy in theatrical ways, that Imus was a legend and pioneer among talk show hosts, that Obama's own black relatives have on occasions expressed prejudicial statements about whites similar to what Imus does, that we all have our favorite talk shows, whose hosts occasionally cross the line, and that he can't quite remember whether he'd ever been on the Imus show, or whether he ever had heard Imus say anything that was insensitive — and therefore he could not and would not disown a Don Imus.

This is the real message of the Obama racial transcendence candidacy.

And here is how it will operate in Obama's foreign policy: 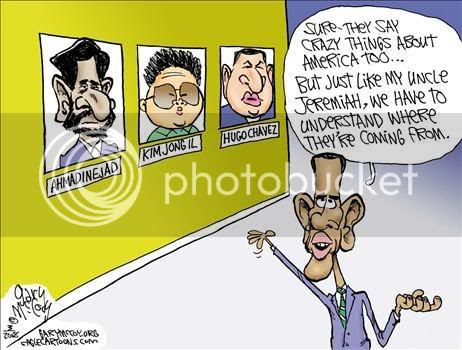 Cartoons by Gary McCoy
Posted by Dr. Sanity at 7:15 AM