In a column discussing the question that Obama never answered in the last debate about Libya and Benghazi, Charles Krauthammer notes that:


Unfortunately for Obama, there is one more debate — next week — entirely on foreign policy. The burning issue will be Libya and the scandalous parade of fictions told by this administration to explain away the debacle.

No one misled? His U.N. ambassador went on not one but five morning shows to spin a confection that the sacking of the consulate and the murder of four Americans came from a video-motivated demonstration turned ugly: “People gathered outside the embassy and then it grew very violent and those with extremist ties joined the fray and came with heavy weapons.”

But there was no gathering. There were no people. There was no fray. It was totally quiet outside the facility until terrorists stormed the compound and killed our ambassador and three others.

The video? A complete irrelevance. It was a coordinated, sophisticated terror attack, encouraged, if anything, by Osama bin Laden’s successor, giving orders from Pakistan to avenge the death of a Libyan jihadist.

Not wishing to admit that we had just been attacked by al-Qaeda affiliates perhaps answering to the successor of a man on whose grave Obama and the Democrats have been dancing for months, the administration relentlessly advanced the mob/video tale to distract from the truth.

And it wasn’t just his minions who misled the nation. A week after the attack, the president himself, asked by David Letterman about the ambassador’s murder, said it started with a video. False again.[Emphasis mine]

Indeed, it seems likely that President Bush, at least, came to realize that we were not just dealing with a bunch of criminals, but an entire culture and ideology determined to destroy the West. That could be the reason he stopped making Bin Laden's capture a top priority (for which he was mercilessly mocked by the left, BTW).

Obama, OTOH, has always been convinced that the threat of Al Qaeda and Jihadists is overblown and purely a criminal matter. That's why he focused on Bin Laden and why he and his leftist base were so jubilant that it was on his watch that the terror leader met his demise. Let me be clear at this point: I, for one, am VERY glad that particular monster is dead and in hell. But, you have to be completely clueless about what has been going on all over the world in the last 10 years to believe that the fanatical culture and religion that spawned Bin Laden somehow was going to magically disappear when he did. Ask Lara Logan, for example who makes lot more sense than anybody in Obama's Administration when it comes to the war on terror (otherwise referred to as overseas contingency operations).

So, when the gloating and dancing over the grave was interrupted by a little reality, what's a Democrat/leftist to do? After all, they've been lying to themselves about this issue for a decade now--why shouldn't they automatically go into lying mode to (1) preserve their precious narrative for as long as possibly; and (2) cover up their incompetence?

By lying to the American people about what happened in Benghazi, they preserved their "honor" and self-esteem.

This brings me back to the whole idea of the Democrat/leftist "shame culture", about which I have written before.


[M]any Democrats and certainly most leftists are completely shameless in the sense that they will never ever, for as long as they can possibly get away with it, going to admit to bad behavior. And in those rare cases where they simply cannot wiggle and maneuver and lie and deceive; or self-righteously tell you how wonderful they really are and all the wonderful things they have done; they will simply pretend they are still virtuous and have been victimized in some way.

If you recall, the other day I commented, while talking about the neo-Marxist economic modus operandi: "Conservatives believe they have better ideas. Leftists believe they are better people."

For those not keeping track of the Libya timeline, here is a handy guide that will bring you up to date (except that new information just keeps coming out that that damns the Obama team) 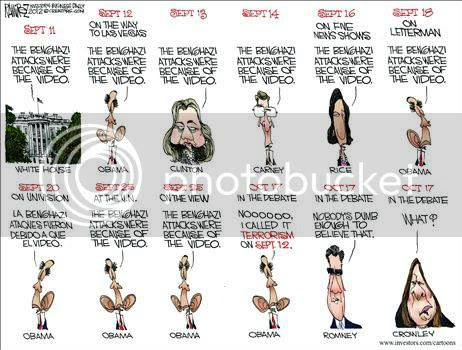 Denial of reality can only end in the reaping of the whirlwind.