Romney comes through and dominates the debate.

The booms you are hearing are leftist heads exploding as they come to grips with the myth they manufactured about their messiah.

Perhaps now they can begin to face the degree of devastation the One has left in the last four years??

Nah....in a few days they will go right back into denial and have devised a rationalization for Obama's performance--or should I say, found someone to blame for it.

Watch and learn, kiddies, about supremehypermegadenial.... 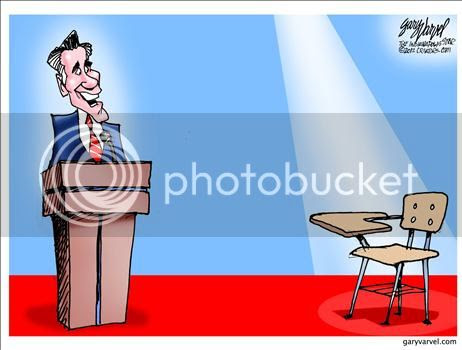 UPDATE: The political right definitely should not gloat at last night's exposure of Obama's mediocrity and fecklessness. Considering what is happening all over the world today with wars and rumors of wars (in Syria, Turkey, China, Japan, North and South Korea etc. etc.):

Someone at another site pointed out that the American public just saw the President Obama that Putin and all the other bad guys knew about all along. Now we know why they were kicking him around. But if he was weak then his recent public humiliation has made him even weaker now.

Nobody should gloat because he’s still the President until January. And in the meantime, every shark within miles is going to be homing in on the scent of blood. They will emboldened to try a stunt because they think they can get away with it.

The NYT has it right. Obama’s caught between looking weak by not striking back and lighting a fuse to a bomb that may blow up in his face. What can the President do? What all Presidents have done before. Ask for help both within the his own party and across the aisle.

I know what I think is the likely scenario that Obama and his handlers will choose and it is unlikely to be a sudden outbreak of bipartisaship for the good of the nation....I hope I am wrong.
Posted by Dr. Sanity at 10:31 AM

In Egypt, American sovereign territory was invaded, and our president apologized. In Libya, our ambassador was assassinated, and our president apologized. In Afghanistan, we are fighting a war of attrition; our internal security is suspect, our bases are invaded and military hardware worth hundreds of million dollars is destroyed. In America, tens of millions of Americans are unemployed or underemployed, and nearly half of the population may be net negative contributors to society. The appearance of weakness may already be irrevocable.

Oh, and the clincher, the majority of America's women voluntarily reproduce in the minority. Perhaps our civilization's time, as other great civilizations before us, has already passed. It seems that a large portion of our society just wants to enjoy the moment.

Yeah, we not only appear weak, we are weak, and growing progressively weaker.

Perhaps it's time for a world war, which will wake people from their decadent slumber.

I love his big white teeth and that broad smile...he's so...sincere, right?

What would that snake do once in the boat going from the island to the mainland (recall the joke)?

He bites his savior!

Obama-Mao has done a great job from his (hidden) perspective! Kudos to him for all the destruction.

But da man ain't done doing to us what he intends...

Even a wooden stake into his heart won't stop this evil metrosexual.

Recall the hundreds of lawyers waiting in the wings to pounce on the forthcoming election results on behalf of the "greatest commander in chief" this country has ever produced!

Trouble still lurks in every shadow surrounding us. Stay five yards apart and keep your senses alive to stay alive.

Yeah, I dunn’o. In general our enemies don’t necessarily want to strike us because of a weak leader but rather fear us because of our military might. I’m no fan of Barry’s, to put it mildly, but he has shown that he will unleash the hounds. Ask the Samoli pirates, those on the receiving end of the countless drone strikes, Osama and Libya. Though if they want him to have a chance of staying in the WH they may want to think about that. (Wag the dog is about the only chance he has now.)

As far as him reaching out across the aisle, ah… yeah no. Seriously, put the pipe down. Besides, with a month to go before the election what exactly could he accomplish with that? What legislation could he start and finish by then, all the while he’s campaigning (like a mother after last night).

The Repub’s in the House are not going to damage Mitt’s chances by cooperating. Besides, it’d just make him look even weaker by appearing desperate and rightly so. The independents, who always decide elections, will see right though it.

He’s screwed. And it could not have happened to a better man.

What Romney committed last night was an act of war against the Left.

The political polarity is complete; the 'moderates are akin to people walking down the broken line on a two lane highway. You'll get hit by both sides.

Anyone believing that the Left will head to a corner and sulk needs to have their meds adjusted. That debate was just the first shot.

You may have to treat Mathews and Shultz. They're spinning faster than a dervish

Thank you again, dear Doctor, for your clarity and perspicacity. We - the nation - needs your wisdom and viewpoint.

Totally OT Doc, but up your alley.