THE VIRTUE OF INDIVIDUAL FREEDOM

I think this is an extremely important point to remember about democracy:

Winston Churchill grabbed the nub of democracy when he said: "It is said that democracy is the worst form of government except for all the others that have been tried." We Americans invest far too much hope in the virtue of democracy.

The problem with democracy worship is that the "Will of the People" has no special moral authority. The Founding Fathers knew that well. The purpose -- the only true purpose -- of government is to preserve the rights of the individual to life, liberty and the pursuit of happiness. When any government fails in that single moral purpose, it loses all legitimate authority. The Declaration of Independence was not based upon a plebiscite. Indeed, probably a majority of Americans did not support the revolution. No matter: if the goal of liberty could be won best by the rough tool of democracy, then that tool was useful.

Those who want "Power to the People!" never want power to the person. They think like Marxists or Nazis or some other incarnation of wickedness which cannot persuade free people to buy whatever they are selling. From this moral positioning come "People's Courts" run by "People's Prosecutors" which consign untamed consciences and minds to a hateful, dreary gulag. We see this clearly enough when the physical costume is worn by the sadistic thug governing at our notional behest. So when Mubarak leaves, few shed a tear at the closing of official torture chambers.

But we miss the horror of rampant, totalitarian democracy when the channels of thinking and of feeling have been so constrained that nearly "everyone" thinks and feels the same. So when public education and state sponsored academia colludes with other offices of government and officially licensed media to produce a single, superintending ideology with components calculated to compromise constituencies, somehow democracy is said to "work."

I have noticed lately that many people tend to confuse democracy, which can be a very good system of governmnet under certain circumstances; with individual freedom, which is what people all over the world, in every culture and time have fought and died for.

It is not democracy that our Founders so firmly believed in, it is liberty.

Democracy is basically rule by an omnipotent majority. There is nothing in a democracratic form of government which protects individuals, or any group of individuals who happen to be in a minority, against the unlimited power of the majority.

In other words, in a simple democracy, there are no guarantees that the majority will not impose its dictatorial, totalitarian or authoritarian rule over minorities.

There are no guarantees that a majority in a supposedly democratic country, for example, might not vote someday for sharia law.

The system of government we have here in the U.S. is actually a republic which, while democratic, is a system of government that controls the majority to protect the individual's right to life, liberty and the pursuit of happiness. The Founders considered these rights unalianble, and they formed the basis of the Constitution and the Bill of Rights that they drafted.

A republic is a constitutionally limited form of democratic government which is created by a written constitution that is adopted by the people and can be formally amended. The powers of this government are formally divided in this constitution between three separate Branches: Executive, Legislative and Judicial.

Many of the Founders were of the strong opinion that these United States should never become a true democracy. Benjamin Frankly famously replied when asked in 1787, by a woman after the the Constitutional Convention, what kind of government had been decided upon: "A republic, madam, if you can keep it."

Even then, they understood how democracy could undermine and eventually negate the very freedoms and ideals they knew must be the foundation of this country.

•James Madison: "Democracies have ever been spectacles of turbulence and contention; have ever been found incompatible with personal security, or the rights of property; and have, in general, been as short in their lives as they have been violent in their deaths" (1787).

•John Adams: "Remember, democracy never lasts long. It soon wastes, exhausts, and murders itself. There never was a democracy yet that did not commit suicide" (1814).

In the U.S., the rule of law protects the individual from the tyranny of the majority.

That is why the act of simply voting in the Middle East is not necessarily any guarantee of liberty for the people. Without the proper constraints, the majorities in countries like Egypt and Iraq can simply democratically vote away the rights of Christians, Jews, women, homosexuals, or any other minority group, at their whim. They can vote for tyrants and dictators and allow them to suspend freedom--like they have in Venezuela. They can vote to bring thugs like Hamas and Hezbollah to power; and impose sharialaw on everyone.

This reality must be understood and the mindless worship of "democracy", which is no guarantee that liberty and freedom for all will prevail, must cease. Unless the power of government, even a "democratically elected" government, is constitutionally limited so that the freedoms of even the smallest minorities (i.e., individuals) are protected from the majority, tyranny is likely the only thing that will prevail.

The real virtue is not democracy, it is--and always has been--individual freedom. 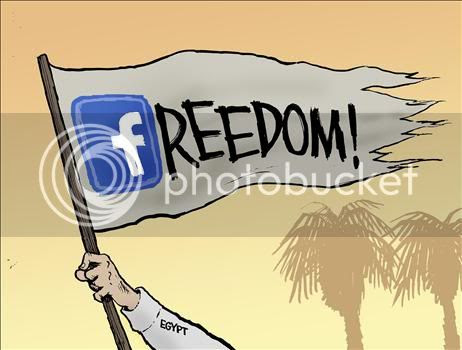 [Political Cartoons by Steve Breen]
Posted by Dr. Sanity at 7:19 AM