In "Public Unions and the Socialist Utopia", Robert Tracinski has captured the reality of the situation that is going on in Wisconsin and which is bubbling up in all the other states of the Union:

The Democratic lawmakers who have gone on the lam in Wisconsin and Indiana-and who knows where else next-are exhibiting a literal fight-or-flight response, the reaction of an animal facing a threat to its very existence.

It is a matter of survival for Democrats in an immediate, practical sense. As Michael Barone explains, the government employees' unions are a mechanism for siphoning taxpayer dollars into the campaigns of Democratic politicians.

But there is something deeper here than just favor-selling and vote-buying. There is something that almost amounts to a twisted idealism in the Democrats' crusade. They are fighting, not just to preserve their special privileges, but to preserve a social ideal. Or rather, they are fighting to maintain the illusion that their ideal system is benevolent and sustainable.

He goes on to say that, "Unionized public-sector employment is the distilled essence of the left's moral ideal. No one has to worry about making a profit."

If you doubt the socialist bona fides of these unions, get a load of the union boss, Richard Trumka, who uses Marxist class struggle rhetoric on a daily basis and who apparently speaks on a daily basis to Obama or his higher up minions.

He understands the threat that Scott Walker and fiscally responsible Republicans pose to the socialist utopia. What does he care about where the money to pay for the utopia comes from? The solution in his mind is to just keep taxing the rich and all the dirty capitalists--just squeeze them some more! They are a never-ending source of money and wealth!

What does he care about the source of wealth or how it is created? He just wants his piece of the pie.

What does he care that the money is about to run out? He firmly believes that wealth and money magically grow on trees and that all the trees are in the backyards of the rich. Creating wealth is for suckers. Redistributing (i.e., stealing) wealth is where it's at! That's what social justice is all about, after all.

Trumka and Obama are soulmates. They understand that

...public employment is an idealized socialist economy in miniature, including its political aspect: the grateful recipients of government largesse provide money and organizational support to re-elect the politicians who shower them with all of these benefits.

Put it all together, and you have the Democrats' version of utopia.

THEY JUST DON'T CARE THAT THEY ARE RUNNING OUT OF OTHER PEOPLE'S MONEY TO SPEND.

Like misbehaving children they scream and demand that reality must go away.

In America, the ideological crisis of the left is taking a slightly different form. Here, the left has set up its utopias by carving out, within a wider capitalist culture, little islands where its ideals hold sway. Old age is one of those islands, where everyone has been promised the socialist dreams of a guaranteed income and unlimited free health care. Public employment is another.

Now the left is panicking as these experiments in American socialism implode.

Because reality won't go away, no matter how much you scream and whine about it.

You can forgive little children who misbehave like this because they still need to be taught that there is a difference between their inner whims and desires and external reality; that "wishing" won't make it so; and that to obtain what they want from the world, they must use whatever skills and talents they happen to be blessed with to create wealth and pursue their own personal happiness. In a free society with the rule of law, they learn to pursue their dreams without violating the rights of others who pursue theirs.

Those who don't learn this lesson--who believe that what is yours was stolen from them; who insist that they own you and that your talents and skills are their means to a perfect society--grow up (or rather, don't grow up) to be leftists. They carefully disguise their desire to steal your wealth and control your life, as well as the parasitic nature of their philosophy, by convincing themselves (and even the people they use and manipulate) that they are loving and compassionate; that they only want to "help" you for your own good and that of the "greater" good.

The social engineers of the left, motivated as they are by their creative utopian aspirations--expressed by the desire to impose (forcibly, if necessary) universal peace, social justice and brotherhood upon humanity--are completely oblivious to the malignant side of their own natures.

Indeed, both they and the capitalist entrepreneurs, the creators of wealth who they despise so vehemently, are both driven by the darker side of human nature and the corresponding emotions: envy, greed and a need to dominate others.

But, there remains an extremely crucial difference between the two.

The do-gooder leftist in all the various ideological incarnations--the "fleebagger" Democrats; the Trumka union bosses; the angry public employees; the antiwar crowds, the environmental fanatics; all the communists, socialists, and assorted collectivists running around in America; as well as any from either side of the political spectrum who seek to impose their beliefs on others--all offer the rationale that he does what he does for the "common good" and for "social justice", "peace" and "brotherhood". His high-minded, self-righteous rhetoric justifies (to him anyway) imposing his will and beliefs on others for their own good; and he will not hesitate to use whatever coercive capablity he has at hand to get others to do what he wants and what he says.

The capitalist, on the other hand, is overtly out to pursue his own selfish profit, and understands that in a free society he must use persuasion. That is, he must convince people that his ideas and the products of his mind are better than all the rest so that they will be willing to part with their hard-earned money to possess them. His desire for power over others is manifested in an indirect manner because people must wnat what he has to offer and believe that they will benefit from an interaction with him. If they do not have this belief, they will walk away--at least if they live where there is freedom.

There is no parallel social limitations on the behavior of the do-gooder leftist.

This tyrant wannabe does not feel the need to convince others of the veracity or even the effectiveness of his ideas; nor does he accept defeat when others are not interested or resist their implementation. He believes he does not have to ever face reality. Reality is for losers! He knows in his heart what is best for everyone, and he is very willing to use coercion and force if necessary. He will not allow options when he is in the majority; but demands them when he is not; either way, it is his way or the highway. He cannot permit others do do what they think is right for themselves; he must be the one to decide what is right. Other people's feelings or concerns are a matter of complete indifference to him. Only his own matter.

The leftist's desire for power is direct and absolute; and this is a direct consequence of his utopian ideology that drives him. Always a child, but no longer an innocent one, he truly believes that his whims are all that matter in the world. He wants what he wants and reality be damned.

There is no area of your life which will escape his intrusive psychopathology, because he justifies it by saying he is really doing it for your sake.

The clever leftist always manages to hide these darker motivations--the envy, greed, and desire for power--and pretend they don't even exist--even to himself. He tells himself he does not possess such dark motives; that his motives are pure and uncontaminated by the kind of self-serving goals the selfish capitalists pursue. He tells himself that the "greed" of others is to blame for his plight; never his own. He tells himself that it is others who are "selfish", never him. He does what he does "for the children" and some undefined "greater good."

The banal platitudes and silly slogans he chants during his protest marches make him feel oh so good about himself and demonize those who he believes are stealing his rightful piece of the pie. Experiencing too much knowledge and insight about his inner state would make him extremely uncomfortable; perhaps even causing him to question some of his basic assumptions about himself or his beliefs.

This is the essence of the "dilemma of the utopians". They see themselves as so pure and righteous; so correct and virtuous; how is it possible that their beautiful utopian dreams always turn into such horrible human nightmares?

You can then count on the true leftist believer to close his eyes not only to his own internal reality, but also to the external reality that proves the uselessness of his beliefs in the real world. Few on the left have ever acknowledged the nightmare of the Soviet gulag; or Lenin's purges; or China's crackdowns. Few have ever even accepted the incredible human cost their ideologies have taken on humanity; the death the suffering and misery, the abject poverty.

Is it any surprise that the unions think the gravy train can continue indefinitely without consequences? Or, that the money to fuel their whims and utopian fantasies is limitless ?

As long as you believe all the Marxist class warfare BS and rant about the evil capitalists and their "exploitation" and "oppression"; or say you are only taking control of everyone's lives for the sake of "social justice" then everything will always be hunky dory.

When you consider the historical --and catastrophic -- human consequences that have ensued whenever their perfect utopias are implemented, it is little wonder that they will ignore, deny and distort any information that exposes the underlying envy and rage that drive their sociopathic selflessness. Their precious self-esteem would surely plummet, and their self-esteem must be preserved at all costs.

While societies that operate under the rule of law have all the necessary checks and balances that prevent the capitalist from cheating or robbing his clients and hold him to account if he does; civilization has been fooled repeatedly throughout history by the virtuous, self-righteous, anti-capitalist looters of the left who simply disguise their robbery and fraud behind the stated purity of their motives.

Coming soon to the state where you reside: A NEW SOCIALIST UTOPIA ! 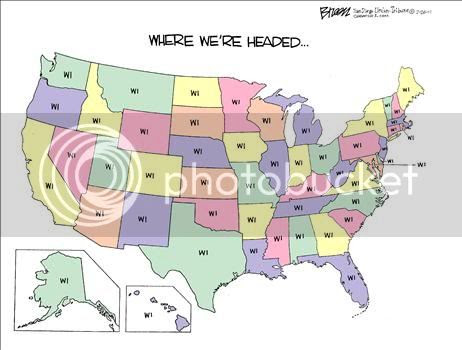 [Political cartoons by Steve Breen]
Posted by Dr. Sanity at 11:15 AM