Conservatives are flummoxed about the Sotomayor news, and have been warned by the likes of Chris Matthews and David Gergen that the nomination is a shoo-in, regardless of Justice Sotomayor’s statements about the less desirable characteristics of white males as judges, and the desire to enact policy from the appellate bench.

I think we are in an Orwellian time, and it is not just explainable by identifypolitics. Remember the grilling of Alberto Gonzales and the hysteria over Miguel Estrada. So the point is not just having a so-called minority profile, but having one compatible to the ‘progressive’ left. If an African-American nominee (cf. Justice Thomas) or Hispanic proves to be conservative, then race can often count against them, inciting a sort of furor on the left that such independent thinking individuals are not suitably deferential to liberals for their trail-blazing work.

Or perhaps the liberal mind feels that de facto it is beyond racial reproach, and therefore can engage in a sort of viciousness that exceeds even that shown non-minority conservatives. In short, the inspirational story of a Hispanic is relevant only to the degree that the nominee favors an agenda of the elite progressive left-without that requisite ideology, the candidate is reduced to an ingrate or a victim of false-consciousness, or a traitor of sorts. (Emphasis mine)

Precisely the point that I made the other day. The Sotomayor nomination is just one more example of the the left's "rainbow hypocrisy."

If you have respect for a person or a cause, it seems obvious that you wouldn't consider those people or that cause to be something to smear someone else with. So, it is always illuminating to discover what the "champions of the oppressed" REALLY think about the handicapped, women, blacks, gays and other minority groups they supposedly champion (i.e., by helping them remain victims for life).

Here are a few examples that exemplify the "compassionate" bigotry of the left and how that bigotry expresses itself when it is politically expedient to do so; i.e., when they want to smear someone with whom they disagree, particularly members of those groups who are not suitably deferential to them.

This is the cover of a flyer distributed by Tennessee Democrats in the 2004 election that shows how they are willing to exploit the handicapped for political gain: 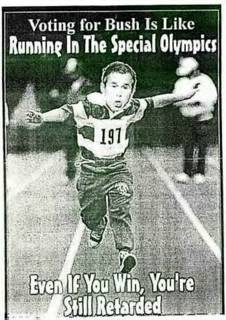 President Obama has also had a "Special Olympics" moment.

Next are two rather thuggish attempts to demean Condi Rice, an amazing woman who is considered by the left to be a "race traitor" simply because she is an independent thinker who doesn't require their victimhood pimping to be successful; and, of course, because she dares to be a Republican.

We all know what the Left and Democrats think of Blacks and other minorities who don't agree with their ideology: they are not REAL Black people; or REAL gays; or REAL Hispanics.

Then there's this one by Pat Oliphant:

Nice racial stereotyping, huh? I use these cartoons because pictures are often "worth a thousand words," and believe me, much more than a thousand words were used to denigrate and racially stereotype Rice throughout her tenure in the Bush Administration.

She, along with other Republicans and conservatives who happen to be members of the left's identified "victim groups" are considered fair game for the left, who become absolutely vicious toward any of the member of those groups as soon as it is realized they are insufficiently deferential toward the left's ideology.

It's really cute how Obama has framed the debate about identity politics.

First, during the election it became clear (and the MSM helped him in this process) that if The One didn't win the election, then it would be definitive proof of the latent racism of America. Would could only be redeemed by doing the right and proper thing--i.e., vote for him.

This is the kind of casual racism and sexism that has become the modern foundation of the Democratic Party. By manipulating Blacks, women, the Gays, and [insert your favorite victim group here] they have fashioned for themselves a 'rainbow coalition'--or to put it another way, a' politically correct' path to power that actually actively promotes racism, sexism--and any other prejudice they can think of--all in the name of eliminating or opposing racism, sexism and prejudice. Wow! Again, you have to marvel at the power of the unconscious. Their rhetoric says one thing, but their policies end up doing the opposite.

In other words, they bring about and make worse the very thing they claim to be opposed to; but at least in the process they temporarily enhance their faux self-esteem and reinforce their sense of superiority and virtuousness.

You begin to get an inkling of what the left REALLY thinks of their rainbow base of support and "diversity"--particularly when they don't toe the party line. Wouldn't you imagine that if the left really meant what they say about "diversity" that they might have celebrated a talented Black woman who was appointed to one of the highest political offices in the land? Does Condi Rice deserve to be ridiculed for her achievements because she is Black AND a Republican? What about if she had been Black and Democrat?? Would she then be shown some "respect"? Would Clarence Thomas have been shown that respect? How about Miguel Estrada? Or Alberto Gonzales?

But, as Hanson says above, the minions of the left considers itself de facto... beyond racial reproach, and therefore can engage in a sort of viciousness that exceeds even that shown non-minority conservatives. By thier own standards, they routinely fail the test of compassion and humanity. Their rainbow coalition is nothing but a rainbow of hypocrisy and self-serving rhetoric.

The rhetoric surrounding the Sotomayor nomination is just one more hypocrisy. Kimberly Strassel captures the duplicity and the cognitive dissonance (not to mention the emotionalism) of the left, as personified by it's most messianic represenatative:

The president, after all, had taken great pains to explain that this is more than an American success story. Rather, it is Judge Sotomayor's biography that uniquely qualifies her to sit on the nation's highest bench -- that gives her the "empathy" to rule wisely. Judge Sotomayor agrees: "I would hope that a wise Latina woman with the richness of her experiences would more often than not reach a better conclusion [as a judge] than a white male who hasn't lived that life," she said in 2001.

By the president's measure, the nation couldn't find a more empathetic referee than Justice Thomas. And yet here's what Mr. Obama had to say last year when Pastor Rick Warren asked him about the Supreme Court: "I would not have nominated Clarence Thomas. I don't think that he was a strong enough jurist or legal thinker at the time for that elevation."

In other words, nine months ago Mr. Obama thought that the primary qualification for the High Court was the soundness of a nominee's legal thinking, or at least that's what Democrats have always stressed when working against a conservative judge. Throughout the Bush years, it was standard Democratic senatorial practice to comb through every last opinion, memo, job application and college term paper, all with an aim of creating a nominee "too extreme" or "unqualified" to sit on the federal bench.

Mr. Obama knows this, as he took part in it, joining a Senate minority who voted against both Chief Justice John Roberts and Justice Sam Alito. Mr. Obama also understands a discussion of Judge Sotomayor's legal thinking means a discussion about "judicial activism" -- a political loser. In a day when voters routinely rise up to rebuke their activist courts on issues ranging from gay marriage to property rights, few red-state Democrats want to go there. Moreover, a number of Judge Sotomayor's specific legal opinions -- whether on racial preferences, or gun restrictions -- put her to the left of most Americans.

Which brings us to Ground Rule No. 2, which is that Republicans are not allowed to criticize Judge Sotomayor, for the reason that she is the first Hispanic nominee to the High Court.

Read it all to discover Obama's new ground rules that take identity politics (and its latent bigotry) to even higher levels of Orwellian absurdity and political correctness.

As Rosslyn Smith at American Thinker says, "And to think some people actually thought that by voting for Obama this nation would be put identity politics behind us."

HAH! On the contrary, the election of Obama has made identity politics--and the left's rainbow hypocrisy-- front and center in American life.
Posted by Dr. Sanity at 7:08 AM