"OH, BRAVE NEW WORLD THAT HAS SUCH ETHICAL SPEECH GUARDIANS IN IT...!"

The assault on young minds by the political left feverishly continues. The left understands clearly that if they can subvert the young; indoctrinate them early, then they will be good little leftists for the rest of their lives (assuming they are prevented from ever having to think for themselves--something the Obama Administration is intent on making sure happens.

The basic principles of the plan are simple:

In the videos, YAF members approach their classmates with a petition calling for the redistribution of student GPAs. “It would make it so that all students have an equal opportunity to go to grad school,” University of Oregon YAFer Kenny Crabtree explains. Students with bad grades would therefore be entitled to points earned by straight-A students.

Their classmates are flabbergasted.

“Is that, like, a joke or something?” one guy responds.

“Why would you take points from people who are higher up and give them to people who didn’t meet the requirements?” another asks George Mason University YAFers. But when asked if he supports Obama’s wealth redistribution schemes, he says “yes.”

Shocking? Not really. As I pointed out in my March 30 column, most college students are economically illiterate.

Here is the YAF video referred to above. It's worth watching:

2. TAKE CONTROL OF THE CURRICULUM

From an April 24th story at CBS NEWS:

President Barack Obama on Friday renewed his call for the government to stop backing private loans to college students and replace them with direct financial aid to young people, a challenge to a decades-old program with strong congressional support.

Obama's plan to eliminate the Federal Family Education Loan program could save $48 billion for taxpayers over the next decade, but critics warn it could turn the Education Department into a national bank. Lenders and some college officials oppose the proposal, which Obama backed as a U.S. senator and pushed during the presidential campaign. 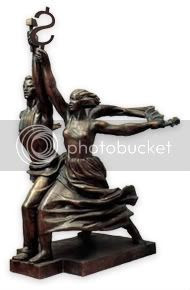 Of course, there is a little catch to taking the money from the government. Isn't that nice? I suppose that he expects after the K-12 indoctrination programs and the carefully constructed "social justice" curriculum, that college students and graduates will become good little workers for the state.

Oh, brave new world...coming to you soon on a college campus nearby!
Posted by Dr. Sanity at 6:22 AM