A few recent sampling of the left's "fake, but accurate" mentality: 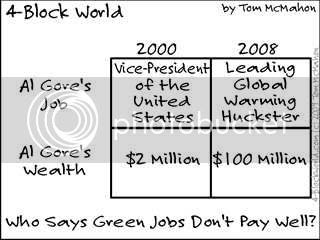 And, while we are speaking of scams and frauds....here's a doozy:

Rick Duncan” of Colorado Springs was a prominent anti-war activist who claimed to have served in Iraq on three tours of duty AND survived the 9/11 attack on the Pentagon. He has now been unmasked as a lying mental patient (via Colorado Springs Gazette with a big hat tip to This Ain’t Hell):

The leader of a statewide veterans group who fought for homeless veterans in Colorado Springs was in the Denver County jail on Wednesday, unmasked as a former psychiatric patient who posed as a wounded Marine officer and 9/11 survivor.

Federal authorities are looking into whether Rick Duncan, whose real name is Richard Glen Strandlof, could have pilfered money he raised in the name of Colorado veterans, said Daniel Warvi of the Colorado Veterans Alliance (CVA), the group that Duncan founded.

“We were all taken aback,” Warvi said.

Strandlof, 31, who invented the name Duncan and claimed he was a former Marine captain and 1997 graduate of the U.S. Naval Academy, never served in the military and falsely claimed that he was in the Pentagon during the Sept. 11, 2001, terrorist attacks, the group said.

Two members of CVA said the group became suspicious of the man they knew as Duncan after discovering inconsistencies in his personal story…The group said it found that Strandlof had been a patient in a mental hospital in Washoe County, Nev., at the time of the roadside bombing in Fallujah, Iraq, that he claimed left him severely wounded.

Read it all and watch the videos at the link. Don't expect scam artists posing as journalists to make a big deal about this, though; they've got more important fish to fry.

I hear a song parody in my head to the tune of "Gypsies, Tramps and Thieves"....but I'm rather overwhelmed with work at the moment. Later.
Posted by Dr. Sanity at 7:03 AM