After only 120 days, the Obama style is all too apparent: the more earnestness he exhibits in his rhetoric ("We are a nation at war," he's no socialist, the last thing he wants to be doing is taking over banks and running auto companies, etc.) the less likely it is that his actions will comport with that rhetoric.

As yesterday's editorial notes, in the speech, the president accused President Bush of adopting an "ad hoc legal approach for fighting terrorism that was neither effective nor sustainable — a framework that failed to trust in our institutions, and that failed to use our values as a compass.” Let's put aside that the first part of that assertion, as the editorial demonstrates, is absurd: the Bush policies were far from ad hoc, they have been spectacularly successful, and Obama himself (for all his disclaimers) is sustaining them. I want to focus on the second part.

When businesses fail, we have a framework, an institution, and a set of values that are triggered: The framework is called bankruptcy, the institution is the United States Bankruptcy Court, and the applicable values are found in the corpus known as federal bankruptcy law, which prescribe bedrock principles like: secured creditors take priority over unsecured creditors. Rather than trusting in those things and using settled law as a compass, Obama has adopted an ad hoc approach which has proved grossly ineffective and — given the moral hazard it infuses in the entire financial system — unsustainable.

Why isn't the GM debacle a violation of the "rule of law" that Pres. Obama and Attorney General Holder are so fond of lecturing us about?

Over and over again I hear how "wonderful" Obama's rhetoric is; how much everyone responds to it and how it makes them hopeful about the future etc. etc. etc.

Frankly, I can barely stand to listen to the man. I have to read transcripts of most of his speeches because my reaction to his style is so negative. I don't like the sensation of being manipulated; nor do I like being lectured to by someone who instinctively believes they are far more virtuous than I am-- and intends to show me the error of my ways.

Understand that I listen to people for a living. I hear various degrees of honesty, sincerity, and real emotional pain being expressed on a regular basis. I also hear some of the most self-serving, dishonest and completely irresponsible utterings that it is possible to imagine. Yet, in my professional career, I have to freely admit that I have heard nothing like the deceitful and self-aggrandizing utterings of Barack Obama, which seem to get more and more pathological with every speech he gives. His most recent scam, in the National Archives in front of a fake copy of the U.S. Constitution just about takes the cake. This is not irony, so much as it is the grandiosity of tyranny.

Bill Clinton--who I actually liked for the most part; even his amusing narcissism, which seems so childishly innocent in retrospect--was completely harmless compared to the sociopathic statist that is our current POTUS.

Mark Levine in his excellent book Libery and Tyranny summarizes it best:

The Statist in America is no less resolute than his European counterpart but, by necesity, he is more cunning--where the European lurches and leaps, the American's steps are measured but steady. In America, the Statist understands that his counterrevoultion must at least appear gradual and not revlutionary--sometimes even clothed in the flag and patriotism--lest his intentions become too obvious and thus alarming to his skeptics.

For the Statist, the international community and international organizations serve as useful sources for importing disaffection with the civil society. The Statist urges Americans to view themselves through the lenses of the those who resent and even hate them. He needs Americans to become less confident, to doubt their institutions, and to accept the status assigned to them by outsiders--as isolationists, invaders, occupiers, oppressors, and exploiters. The Statist wants Americans to see themselves as backward, foolishly holding to their quaint notions of individual liberty, private property, family, and faity, long diminished or jettisoned in other countries. They need to listen to the voices of condemnation from world capitals and self-appointed global watchdogs hostile to America's superior standard of living. America is said to be out of step and regressive, justifying the surrendering of its sovereignty though treaties and other arrangements that benefit the greater "humanity." And it would not hurt if America admitted its past transgressions, made reparations, and accepted its fate as just another aging nation--one among many.

Next time you listen to the Obamessiah's speeches, listen to what he doesn't say. Listen to the vagueness, the vacuity. Listen to the lack of specifics and the blatant emotional manipulation. Listen to the cognitive dissonance between what he is saying in his seductive, sedating style; and what he is doing with his deliberate, statist national policies and his foreign policy that not only demeans America by apologizing for her very existence; but severly handicaps her ability to act in the future. Watch how he badmouths the previous Administration, then surrepticiously implements the same policies that kept us safe over the last 8 years. The only problem with this last is that by simultaneously denouncing the security policies he is embracing, he is making schizophrenics of all the honorable people who are working hard to keep this country safe.

How long can this schizophrenogenic behavior go on before it essentially cripples those same patriots--because their service and their patriotism can be rendered criminal on the slightest whim of this unprincipled coxcomb?

How long can you pretend to stand for peace, when you enthusiastically embrace lying, murdering, genocidal terrorists? 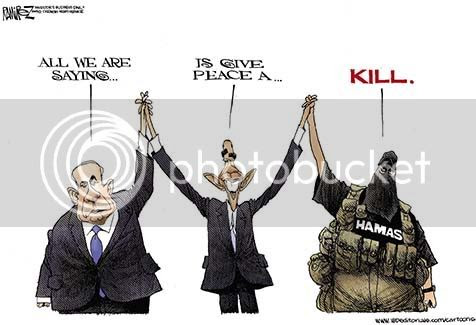 Of course, the Democratic Party has given Obama great role-models in this regard: