FAILURE IS THE MOST DESIRABLE OUTCOME FOR THE LEFT

Victor Davis Hanson writes that "Failure is Very Much and Option":

Lost in the furor over the budget is any discussion of the fact that, after a certain baseline point, redistributive payouts might be making things worse for those on the receiving end. Black middle-class flight from northern big cities, failing public schools like nearby Fresno City College, where yesterday it was announced that 70 percent of students (the majority of them on some sort of federal and state loan support) fail to receive a two-year AA degree — these are just a few indications that increasing reliance on government subsidies does not eliminate, and may well perpetuate, such ills as illiteracy, poverty, and hunger.

Read the whole thing. It's worse than Dr. Hanson writes, though, because failure is actually a really desirable outcome insofar as it can give more opportunities for the progressive left to increase their power and control over others. The ever-expanding culture of victimhood that has been exploited by the progressive left to continually expand its base and increase its political power, has done little or nothing to actually help the victims it routinely identifies and proceeds to infantalize. The only people being "empowered" by this culture are the intellectual elite of the left and their Democratic Party minions. Indeed, the constant jockeying among these identified victim groups; their competing claims as well as the continued failure of all the politically correct policies developed to cater to them, are evidence of the intellectual, moral and political bankruptcy of leftist ideas. For more than a century, the false promises of socialism and communism have been found to be empty. But even in failure, the left refuses to give up the failed policies that have brought individuals and nations to utter ruin--they just recycle them, like good little environmentalists. President Obama in his ridiculously vague and partisan oration on budgetary matters yesterday gives us a perfect example of the recycling technique perfected by leftists in denial. This is a man who promised "hope and change"--and now he is the master of the status quo. Paul Ryan, in his response to the President has this to say:

We cannot accept an approach that starts from the premise that ever-higher levels of spending and taxes represent America’s new normal. We have an obligation to fulfill the mission of health and retirement security for current retirees and future generations. We have a historic commitment to limited government and free enterprise. And we have a duty to leave the next generation with a more prosperous nation than the one we inherited. [...] If you are someone who agrees with the president that we cannot avoid this outcome without resorting to large tax increases, know this: No amount of taxes can keep pace with the amount of money government is projected to spend on health care in the coming years. Medicare and Medicaid are growing twice as fast as the economy — and taxes cannot rise that fast without a devastating impact on jobs and growth. If you believe that spending on these programs can be controlled by restricting what doctors and hospitals are paid, know this: Medicare is on track to pay doctors less than Medicaid pays, and Medicaid already pays so little that many doctors refuse to see Medicaid patients. These arbitrary cuts not only fail to control costs, they also leave our most vulnerable citizens with fewer health-care choices and reduced access to care. And if you believe that we must eliminate waste, fraud and abuse in these programs, know this: Eliminating inefficient spending is critical, but the only way to do so is to reward providers who deliver high-quality, low-cost health care, while punishing those who don’t. Time and again, the federal government has proved incapable of doing that. Medicare is projected to go bankrupt in just nine years unless we act to curb the relentlessly rising cost of health care. This cannot be done with across-the-board cuts in Washington. It has to be done by giving seniors the tools to fight back against skyrocketing costs. That’s why our budget saves Medicare by using competition to weed out inefficient providers, improve the quality of health care for seniors and drive costs down. The president’s proposals are aimed more at empowering government than strengthening the free market.

And that last sentence about sums up what's going on here. The very very compassionate left is so wrapped up in feeling good about themselves (note how they routinely emphasize that their opponents want women, children and the elderly to 'suffer'--some have even gone so far as to call it a 'genocide' or insist that Republicans and conservatives 'hate' everyone but wealthy white males. This is as pristine an example of psychological projection as you are likely to witness) that they could care less about the actual outcomes of their policies. If the economy is worse because of their frenetic spending, they quite naturally believe that spending MORE will make it better--that, and escalating the rhetoric (remember their terrible anguish about the lack of civil discourse and the conservative 'hate' not so long ago??) against those who, in good faith, are trying to deal with reality. Just watch as Paul Ryan--not the specifics of his plan--becomes the lightening rod for the incivility of the progressive left. Success is not the goal; nor do they want the economy to turn around if it is the free market and reducing their profligate ways that will accomplish that end.

They are all about the redistribution of wealth; the creation of entitled victimhood groups who will blindly support them; and the expansion of big government for the sake of holding on to their power over others. Oh yes, all that and posturing. 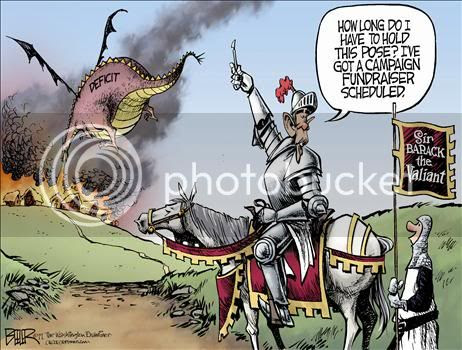