Paul Krugman, professional moron economist argued in the NY Times recently that patients are not consumers and that it is "profoundly irresponsible" to say that they are. He actually has the audacity to cite the "special" relationship between doctor and patient as his justification for this position:

Here’s my question: How did it become normal, or for that matter even acceptable, to refer to medical patients as “consumers”? The relationship between patient and doctor used to be considered something special, almost sacred. Now politicians and supposed reformers talk about the act of receiving care as if it were no different from a commercial transaction, like buying a car — and their only complaint is that it isn’t commercial enough.

What has gone wrong with us?

What has "gone wrong" is that the government and wonks like Krugman have been instrumental in the systematic and ongoing destruction of that "special, almost sacred" relationship.

In fact, I remember very clearly when the relationship first began to go south: when Hilary Clnton used her position as firs lady to aggressively pursue "Hilarycare" (as it was then called) and generated all the redistributive euphoria (which came to full fruition with Obamacare more recently) back in the early 90's. Life was never the same for physicians after that early fiasco; the HMO started the disruption of doctor patient; and it even impacted how doctors were recruited and trained by medical schools (not necessarily for the better).

The doctor-patient relationship has never been the same since.

As patients had less and less to do with actually making decisions with doctors regarding their care because they were seduced by the idea of not having to pay for treatment; and, as the government and insurance company bureaucrats increasngly made those decisions INSTEAD OF either doctors or patients, it seemed that all the loca,l state and federal government programs that I was acquainted with simultaneously started referring to patients as "consumers." This remarkable change was clearly, I felt at the time, an attempt to downplay and disguise the reality that patients no longer had control over the money that was paid to doctors and no longer were even in the loop in deciding what care was thought to be "best" for them.

In fact, as a doctor, I absolutely hated calling patients "consumers"--not because they were not consumers of the product that I had to offer, but because the term was suddenly being deliberately and consciously used to denigrate and marginalize the doctor/patient relationship; and to make patients feel that they still had some power in that relationship.

The only power they had was to see the doctor their plan told them to see.

Don't get me wrong, I think that patients are, and of right ought to be considered consumers. Who else has the biggest stake--both financially and physiologically-- in the outcome (and cost) of health care services? But calling them "consumers" in the current system of government/insurance-rationed health care is extremely deceiving.

Because it is the government (who whoever is mandated to pay for the health services) that has assumed the greatest stake and the bottom line IS ALWAYS A FINANCIAL ONE.

I have had more than 30 years working in this environment. Patients used to--when they actually were "consumers" of health care--used to decide all the time to pay for procedures and medications that they and their doctors decided were needed. They also used to negotiate if necessary, with doctors and hospitals on costs and repayment issues. This is not allowed to happen now as the government, hospitals, and insurance companies have squeezed the consumers out of the equation. You cannot get drugs that aren't on the formulary of a hospital (and at some large government hospitals, that formular is strictly controlled and does not include newer--and hence, more expensive drugs, even if they are better for some patients); and I can tell you first hand that it is extremely rare for considerations other than financial ones to be the bottom line. I think doctors still care about their patients, but they, too, are squeezed out. Patients are not consulted much at all, but told what treatments they will get and what will be paid for. Most health care "consumers" don't have much choice at all. Considering the enormous amount of money that is in question, Americans should be getting the best possible care if it is true that "you get what you pay for." But, you see, what used to be a simple consumer transaction between two individuals--a doctor and a patient--has become a circus of paperwork and middlemen; a factory of waste and stupidity (penny wise and pound foolish) and a carnival of thwarted commercialism.

Unfortunately, government medicine--whether at the local, state, or federal level, is not willing to pay the real costs of excellent health care. These administrative middlement have developed a number of very clever covers for this, always touting "evidence-based medicine" as their baseline for denying care. Their rallying cry is "there's no scientific evidence for that treatment over this cheaper one." But in a system where scientific research never seems to actually do those clinical studies that might prove that one treatment is better than another for a given individual (remember, that all these studies are statistical averages that don't take individual responses into account, but average them out)this trope is entirely bogus most of the time. Doctors don't treat "statistics" they treat individuals (as I tell my residents repeatedly).

And only individuals can make the decisions that are right for them at any given moment.

So why have health costs continued to skyrocket, even with all these new controls on spending in every facet of the doctor/patient relationship?

Carpe Diem says it is because patients are not spending their own money:

Krugman is correct that patients are not consumers, but for a completely different reason that Krugman misses entirely: Almost 90% of health care costs are paid with "other people's money" (insurance companies, government and employers, see chart above, data here), and only about 11% is paid "out of pocket" by patients. So patients are no longer the "consumers" of health care, and they haven't been for a long time, because the "consumer" paying almost the entire cost of medical care is a third party. Over time, the "consumer" paying the bill for health care services has gradually become third party payers, and the trends projected in the chart above indicate that it won't get any better in the future.

But Krugman seems to be arguing that regardless of who is paying for health care, "there’s something terribly wrong with the whole notion of patients as “consumers” and health care as simply a financial transaction." Krugman's further claims that “'Consumer-based' medicine has been a bust everywhere it has been tried."

When we think about soaring health care costs in the United States, isn't one of the main reasons precisely because patients have NOT been treated as consumers spending their own money? In that case, I think Krugman has it backwards. If the goal is to control health care costs, that will never happen until patients are treated like consumers.

There's a wonderful graph at the link that is quite instructive.

Krugman and other progressives have it (as usual) ass backwards. The real "doctor/patient relationship" was only healthy and thriving when patients were consumers of health care and were treated as such. They could demand equal stature with their doctors in making decisions; or choose to cede control to a doctor they trusted to act in their best interest. Now, of course, no one necessarily acts in the patient's (or the consumer's) best interest; but it's very telling that every one asserts they are, almost reflexively and defensively.

Just ask the patients who already are in all those lovely plans that ration their care and make decisions for them--especially the sick ones. I think you might discover that they don't feel they are really in the loop at all. 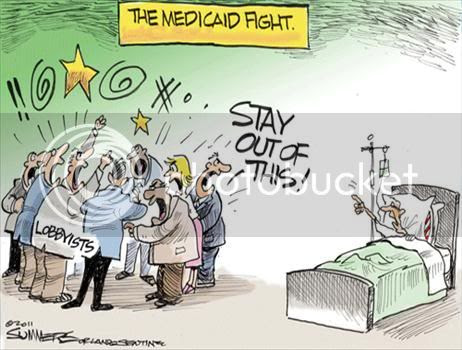