This, from John Lehman, a member of the 9/11 Commission is particularly relevant to the previous post on multicultural and PC insanity:

“President Obama just doesn’t get it,” says Lehman. “I don’t think he has a clue....

“President Obama continues to totally ignore one of the important thrusts of our 9/11 recommendations, which is that you have to approach counterterrorism as a multiagency intelligence issue, and not as a law-enforcement issue. He’s made a lot of commission’s members angry for dismissing our report and ignoring key recommendations.” Obama, he adds, has taken a “lawyer-like, politically-correct approach” to national security issues like terrorist watchlists and no-fly lists. “You got to blame the president for enforcing the politically-correct and legalistic policies that led to these failures.”

Obama is representative of the leftist mindset, which is in complete psychological denial about terrorism, for many of the reasons discussed in this post.

And, while we're on the topic of denial, all the mad hatters of the Obama Administration are also just a little out of touch with economic reality--in fact, most aspects of reality seem to be a bit hard for them to grasp.... 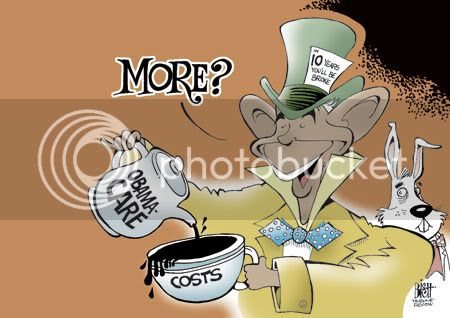 [from the Tribune editorial cartoons]
Posted by Dr. Sanity at 5:31 PM