On New Year's day, I was channel-flipping and discovered among the hundreds of channels I now subscribe to there was a station that was playing classic TV westerns. In fact, they were doing 24 hr marathons of western series; and that day were showing my favorite western from when I was a child: The Virginian! Happily, I settled in to watch. 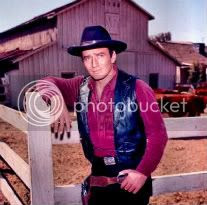 The episode I happened on was mostly about the Judge (Lee J. Cobb) who had presided over the murder trial of a young member of a well-known outlaw family. The outlaw was found guilty by a jury and was awaiting sentencing--hanging--which was to be pronounced by the judge the next day. Into town saunter multiple members of the thuggish family; but instead of shooting up the town and freeing their relative, they decide to get him freed "using the law". There was "prejudice" among the jurors against their family, they claimed, having heard this from a lawyer. This fact, they argued, should cause the judge to completely set aside the verdict and free their clansman.

Their legal argument was somewhat artificially bolstered by the fact that they then went around the town and intimidated and terrorized all the jurors and business owners; giving them a taste of what would happen if the Judge did not rule their way. They also casually mentioned to the Judge that they sincerely hoped his young daughter would stay healthy. They beat up the town sheriff, whereupon he decided it would be prudent to leave town. Soon all the townspeople were clamoring for the Judge to "do the right thing" and free the convicted murdered on the legal technicality. The jurors unanimously swore out an affadavit saying that they indeed had been prejudice against the family because its members had terrorized the town for years with their crimes and behavior.

Well, you know how it ends. The Judge stands up to the town, telling them that if they give into the outlaws' terrorist tactics, then the outlaws will have the run of the town. He stands up to the outlaws on his own, and ends up shooting their leader dead, when the clan attempts to interrupt the sentencing; and then he proceeds to have the convicted murderer's sentence carried out, as his gun is trained on the rest of the family of thugs. The outlaws leave town with their dead; their heads bowed in defeat and their tails between their legs.

That's how it worked in the old western classics. The good guys stood by their principles and refused to be intimidated by evil.

This brings to mind an essay by Victor Davis Hanson a few years back:

...[T]he cowboy more often evokes marshal Will Kane of High Noon. When given the choice of riding out of Hadleyville for a much deserved retirement with his newlywed wife, the tired Gary Cooper instead turns back to face the Miller gang alone. Although his prospects of survival are slim, Kane won’t run or abandon his town that, in fact, would rather appease such killers. In that sense, for some it is not such a bad thing for cowboy Bush to confront regional bullies like Saddam Hussein, the Taliban, Kim Jong Il, or Mahmoud Ahmadinejad — even if the Europeans, like the townspeople of Hadleyville, delude themselves that the Millers of our world would leave them alone if their stubborn self-appointed protector would just ride away. The recent unprovoked attacks by Hamas, Hezbollah, and the verbiage from Iran and Syria should disabuse any of that naiveté.
[...]
That Greek tragic theme — Sophocles’ dramas Ajax and Philoctetes center on the flawed hero that we both shun and need — is a Western constant. In the Magnificent Seven, the outcast hired guns ride into save a Mexican village from bandits. Then after the bloodletting, the surviving Yul Brenner and Steve McQueen depart knowing that they are not to enjoy the tranquility and order that they have alone been able to impart to others only through their gunplay.

The truth is that we live in a global Hadleyville that has deluded itself that international communications, cell phones, or the Internet — like the onset of the 19th-century railroad and telegraph — equate to civilization. In fact, they are all only a thin flashy veneer atop a still wild and savage world in which outlaw regimes like North Korea , Saddam’s Iraq , or Iran push until stopped. After all, the present-day United Nations can protect nations and dispense justice about as well as the territorial marshal a three-day-ride away or the corrupt bought sheriff of a cattle baron’s town. And a Mahmoud Ahmadinejad, Mullah Omar, or Saddam Hussein listens to international warnings about as much as Liberty Valance paid heed to the bumbling coward of a sheriff, Link Appleyard.
[...]
So privately most appreciate an American Tom Doniphon, Shane or Will Kane who from time to time will appear out of nowhere to stand up to a Saddam, Taliban, or Kim Jung Il — or the recent crop of bullies in Lebanon, Syria, and Iran. The latter all may think that an exasperated lame duck George Bush, suffering from international rebuke and low approval ratings, has dropped his flashy cowboy veneer. Perhaps and probably for the better — but they should still beware: if the now brooding Bush really is a cowboy, then he may deal with a few more rogues before he leaves — caring not at all for our present approval but only for his own code and our future safety when he is gone.

The cowboy hero of my youth was a simple man who minded his own business and valued his freedom. It would take a lot to stir him up, but once aroused, he was unstoppable. His talk might be drawling or lazy, but not his principles; and the violence which was always there under the surface of his placidity could be called on to defend and protect that which he valued. Then he would ride out into the sunset; his job done, his duty fulfilled. In The Virginian episode above, the Judge resigned his elected position as judge and began a new career as a rancher after the spectacle of watching his fellow citizens give into evil; and after risking his own life and saving them from it.

The cowboy hero never turned away from what had to be done; and he never cared much for nuance or appeasement. He always understood and accepted the consequences of his actions, not caring if he was liked or loved; but doing what he thought was right, no matter what the cost.

Today the American cowboy lives on in spirit in many aspects of our society. But if anything, there is even more contempt and anger heaped on him by our modern, cynical, and metrosexual society; who long ago stopped valuing the heroic and sees no need for cowboys in the new age.

Today, any hint of unsophisticated cowboy heroics or clear talk of right and wrong, good and evil are met with scorn by the spoiled elites of the world, who perceive the modern cowboy as an unwanted anachronism and a genuine liability--his mere existence a frightening threat to the fantasy world of love and peace they have created in their minds.

Mark Steyn in a column titled "The Joke's On Us" gives an excellent characterization of the mindset of our modern townspeople and today's outlaw terrorists--who aren't so different from the one's faced down by Judge Garth of The Virginian:

On Christmas Day, a gentleman from Nigeria succeeded (effortlessly) in boarding a flight to Detroit with a bomb in his underwear. Pretty funny, huh?

But the Pantybomber wasn’t the big joke. The real laugh was the United States government. The global hyperpower spent the next week making itself a laughingstock to the entire planet. First, the bureaucrats at the Transportation Security Administration (TSA) swung into action with a whole new range of restrictions.

Against radical Yemen-trained Muslims wearing weaponized briefs? Of course not. That would be too obvious. So instead they imposed a slew of constraints against you. At Heathrow last week, they were permitting only one item of carry-on on U.S. flights. In Toronto, no large purses.

Um, the Pantybomber didn’t have a purse. He brought the bomb on board under his private parts, and his private parts weren’t part of his carry-on (although, if reports of injuries sustained in his failed mission are correct, they may well have been part of his carry-off). But no matter. If in doubt, blame the victim. The TSA announced that for the last hour of the flight no passenger can use the toilets or have anything on his lap — not a laptop, not a blanket, not a stewardess, not even a paperback book. I can’t wait for the first lawsuit after an infidel flight attendant confiscates a litigious imam’s Koran as they’re coming into LAX.
[...]
And remember, this was a bombing mission that “failed.” With failures like this, who needs victories?

Joke, joke, joke. The only good news was that the derision was so universal that the TSA promptly reined in some of their wackier impositions a couple of days later. But by then Janet Incompetano, the homeland-security secretary, had gone on TV and declared to the world that there was nothing to worry about: “The system worked.”

Indeed, it worked “smoothly.” The al-Qaeda trainee on a terrorist watch list, a man banned from the United Kingdom and reported to the CIA by his own father, got on board the plane, assembled the bomb, and attempted to detonate it. But don’t worry ’bout a thing; the system worked.
[...]
The real message was conveyed by Fouad Ajami, discussing the new administration’s foreign policy in the Wall Street Journal: “No despot fears Mr. Obama, and no blogger in Cairo or Damascus or Tehran, no demonstrator in those cruel Iranian streets, expects Mr. Obama to ride to the rescue.” True. Another Iranian deadline passed on New Year’s Eve, but the United States will set a new one for Groundhog Day or whenever.

And, just as the thug states understand they now have the run of the planet, so do the terror cells.

It has been lucky for America that our modern cowboys in the law and military have continued to do what all real cowboys were born to do: allow us to sleep peacefully at night by being willing to do violence on our behalf.

In fact, the only thing standing between civilization and the outlaws and terrorists who prey on the innocent and weak are those few cowboys who held to the Code of the West. Today's vapid and elitists leaders, including the holy Commander in Chief. and all the minions of the deluded left may hate and despise them for the violence of their methods--but civilization most certainly could not survive without their moral clarity and protection.

That's what a real hero is all about. The western authors of the past, including those who wrote the episodes of The Virginian (and all the other wonderful cowboy series of the past) understood this fundamental truth about about this American icon.

Sadly, these days the word "cowboy" is usually used pejoritively and as the ultimate insult by the intellectual and moral lightweights of modern politics.

Haha. It would indeed be funny--if it weren't so pathetic.
Posted by Dr. Sanity at 8:57 AM