SIGNS OF AN ALREADY FAILED PRESIDENT

Seth Leibsohn has it exactly right about "what truly shocks the conscience":

Yesterday’s release by the Justice Department was meant to bolster Eric Holder’s decision to name a special prosecutor, and to shock our consciences about how poorly we treated high-value detainees.

I think we should stop with the “high-value detainee” talk and call them “terrorists” from here on out, because I believe we’ve forgotten who these people are. They are not white-collar criminals, and they are not alleged homicide perpetrators. They are terrorists who killed hundreds and thousands of Americans and did their level best to kill more — to put an end to this country’s existence.

The media has led with the story of our interrogation of Khalid Sheikh Mohammed, and in an effort to shock our national conscience, the report says, among other things, that he was told that if there was another attack on American soil, the CIA would “kill your children.”

I’m sorry but I’m left cold by this. The man who masterminded the actual murder of 3,000 Americans and changed our country forever, wanting to do more, was told that his children would be threatened if another attack took place. Let’s recall what we’re actually doing right now: We use Predator drones to actually kill terrorists with missiles — and we actually kill their children, friends, and relatives at the same time.

Please read the entire piece. For details on the CIA Report, John Hinderaker has and excellent and detailed post.

Let's just review Eric Holder's moral preening about this issue; which, as it turns out mirrors the cynically opportunistic and deceitful posturing of his current boss in the White House.

Here is Holder's earlier weighing in on detainee civil rights and the war on terror in 2002 where he had his "no Geneva Convention" interview with Paula Zahn at CNN:

"One of the things we clearly want to do with these prisoners is to have an ability to interrogate them and find out what their future plans might be, where other cells are located; under the Geneva Convention that you are really limited in the amount of information that you can elicit from people.

It seems to me that given the way in which they have conducted themselves, however, that they are not, in fact, people entitled to the protection of the Geneva Convention. They are not prisoners of war. If, for instance, Mohamed Atta had survived the attack on the World Trade Center, would we now be calling him a prisoner of war? I think not. Should Zacarias Moussaoui be called a prisoner of war? Again, I think not."

And here’s Holder, as a top Obama adviser, in a speech delivered only six months ago [i.e., June 2008], in the comfy “progressive” confines of the American Constitution Society’s annual convention:

Meanwhile, Peter Brookes, a Heritage Foundation senior fellow, and a former CIA officer, suggests we keep the following in mind when thinking about the CIA interrogations:

Once we get beyond claims about the alleged mishandling of interrogations by CIA officers, there are a couple of things that people should keep in mind:

1. The interrogation program provided critical information that led to the disruption of terror attacks against U.S. interests in the difficult, early days after 9/11.

2. It isn’t by chance that there hasn’t been another terror attack on U.S. soil since 9/11.

3. These actions were taken by well-intentioned individuals who were likely doing what they thought would help keep their fellow Americans safe.

4. The Justice Department investigation will likely have a chilling effect on CIA officers in the field, who will wonder if they should be getting the terrorist or getting lawyers.

5. Let’s not forget: We’re still at war, and our intelligence professionals represent our first line of defense

Is there any doubt that our courageous President needs to appease his leftist zombie base (lest they turn on him) and throw them some red meat so as to distract them from his epic fail on promoting their utopian health care agenda?

Forgive me if I fail to feel anything but disgust at his and Holder's idea of "morality". Like Leibsohn, I am unmoved by the Khalid Sheikh Mohammeds of this world. I do not for one moment believe that our use of enhanced interrogation methods--which were not EVER used indiscriminantly, or without careful legal and moral debate--are any evidence of a significant deviation from our fundamental principles as a people. I already discussed this issue at length in "Barbarism, Torture and Moral Compasses", but the most relevant portion of that post is this:

In a comment thread from a 2006 post at The Belmont Club, Wretchard, speaking about the barbaric Islamic fundamentalist terrorists with whom we were at war, wrote:

The brilliance of the new barbarism is that you cannot fight it without destroying your own value system into the bargain.

Traditionally the solution has been to consider wartime a discontinuity, when civilization's rules are suspended. It becomes possible, for example, to lay waste to the Monte Cassino Abbey. Berlin was bombed without regard for its buildings, churches or people.

The alternative is to create methods of fighting so discriminating that we can literally shoot between the raindrops. But that creates a different problem, for we will need an intelligence system so comprehensive that it will become intrusive.

Either way, the war cannot be won without cost. And the fundamental fraud foisted on the public is to claim we can have war without horror, conduct an intelligence war without dishonesty and cunning and obtain victory without sacrifice.

His two points are particularly relevant in the discussion of torture. To the extent that we can, we have tried to maintain "civilization's rules" as much as possible, while at the same time suspending them when the situation demands--i.e., adherence to a life-affirming value system that requires you to protect innocents who might be harmed by evil. Indeed, when it comes to the issue of torture, one might even say from an historical perspective that the administration went overboard to try and find techniques that were sufficiently uncomfortable and even unbearable; and which would elicit the necessary information without inflicting lasting harm on the recipient.
In this, they were obviously successful.

In fact, I would say that the Bush Administration used an ethical system that appropriately put the value of innocent life higher than that of the dubious, or so-called "rights" of a terrorist, who happens not to value life at all. Not only that, but the previous administration also managed to identify and use techniques that effectively "shoot between the raindrops" of the multiple definitions and conceptualizations of torture. True, they identified techniques that were harsh; but they were also techniques which did not truly endanger the life of the terrorist (who himself does not value life in the least and would consider such scruples about it "weak").

To say that the use of such techniques is unethical seems to me to entirely miss the purpose of ethics.

If you consider the purpose of ethics--to codify and act on one's values--then the Bush Administration behaved in an exquisitely ethical manner. They codified the most important of American values and acted on them; and in doing so managed to keep America safe from a terrorist attack for more than eight years.

Obama is turning out to be a massive disappointment to even his most slavishly devoted and myopic followers; but this latest cynical and immoral manipulation of our national security to provide political cover for his incompetent leadership shows him to be seriously irresponsible and irresponsibly unserious as POTUS, both in national and foreign policy. He is a postmodern pied piper, leading the gullible of this country down a path of economic ruin and international impotence. As for his and his Administration's moral compass, it is spinning wildly trying to find a direction that pulls him up in the polls.

Obama was never ready for prime time; and is turning out to be a bad joke perpetrated on all Americans.

Leibsohn states, "This is an extremely bad way to begin a presidency — worse than Clinton’s first-year rookie mistakes — and I believe these are the signs of an already-failed presidency."
Hard to believe that we are only 7 months into this madness. It's kind of scary to imagine what may yet come out of this radical leftist Administration.

UPDATE: Over at the Jawa Report, Vinnie quotes Fouad Ajami:

All this hero-worship before Mr. Obama met his first test of leadership. In reality, he was who he was, a Chicago politician who had done well by his opposition to the Iraq war. He had run a skillful campaign, and had met a Clinton machine that had run out of tricks and a McCain campaign that never understood the nature of the contest of 2008.
He was no FDR, and besides the history of the depression—the real history—bears little resemblance to the received narrative of the nation instantly rescued, in the course of 100 days or 200 days, by an interventionist state. The economic distress had been so deep and relentless that FDR began his second term, in 1937, with the economy still in the grip of recession.

Nor was JFK about style. He had known military service and combat, and familial loss; he had run in 1960 as a hawk committed to the nation's victory in the Cold War. He and his rival, Richard Nixon, shared a fundamental outlook on American power and its burdens.

Now that realism about Mr. Obama has begun to sink in, these iconic figures of history had best be left alone. They can't rescue the Obama presidency. Their magic can't be his. Mr. Obama isn't Lincoln with a BlackBerry. Those great personages are made by history, in the course of history, and not by the spinners or the smitten talking heads.

And he ends with the Jawa Report Failed Seal of Approval: 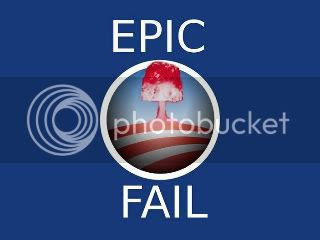 UPDATE II: Andy McCarthy sums up this morning what would be an honest argument against the enhanced interrogation techniques:

There is a principled human-rights position on all this. You can say: "No one wants to see bad things happen to people, but I honestly believe abusive tactics are so corrosive of our society's principles that it would be better for 10,000 Americans to be killed in a terrorist attack than for us to prevent the attack by subjecting a morally culpable terrorist to non-lethal forms of coercion that cause no lasting physical or mental harm."

That would be the honest argument, but it is not going to persuade many people. Thus the continued pretense, against all evidence and logic, that the tactics don't work. Fewer and fewer people are fooled.

Not only will it not persuade many people, but such an argument is never made and isn't likely to be made because it is....well, honest. It is the completely dishonest arguments that keep being mouthed up by adherents of this Administration: Enhanced Interrogation techniques are torture; They don't work anyway; Any information gleaned by them could have been obtained in more compassionate ways; Terrorists are entitled to same civil liberties that all Americans enjoy; and so on and so forth.
Posted by Dr. Sanity at 7:11 AM