PREPARE FOR THE NEW ENLIGHTENMENT !

All those people who noticed that these days we seem to be living Ayn Rand's Atlas Shrugged, better prepare themselves for even worse. The anti-humans are now preparing us for the world of Rand's Anthem. In fact, soon the "scientific debate" about whether or not there is even an "I" will be declared over, at least according to this gushing article:

Who, dear reader, do you think you are? Do you think your mind is capable of independent judgment and largely directs the course of your life? Do you think that most of your decisions in life have been the product of your rational, conscious self? Do you believe you are in control of your life? Do you cherish ideas such as self-expression, a sense of autonomy and a distinct, self-authored identity? The chances are that, albeit with a few qualifications, most of your answers are yes. Indeed, given a pervasive culture which reinforces all these ideas, it would be a bit odd if you didn't.

But the point about this new explosion of interest in research into our brains is that it exposes as illusions much of these guiding principles of what it is to be a mature adult. They are a profound misunderstanding of how we think, and how our brains work. They are fairytales, about as fanciful and as implausible as goblins...

...we are on the verge of a new Enlightenment. He argues that the 18th-century concept of the individual self has run its course and that a new paradigm of human nature is emerging. Given that assumptions of an autonomous individual underpin every aspect of how we order society and our political economy, educate and tackle social issues, this kind of Big Idea tends to make you feel a tad dizzy.

Actually, they make me feel a tad nauseated.

The author makes sure we understand the political implications of all this wonderful research:

This humbling evidence of our hopeless decision-making exposes consumer capitalism as not being about millions of independent decisions of individuals expressing unique identities, but about how social norms can be manipulated to create eager shoppers. Or take the idea of introducing choice into public services; some bizarre consequences will result, such as the popularity of a hospital being determined by whether it has a car park, not the skill of medical staff.

There are two other areas of this new brain research which are arguably more important. First, we have much underestimated the social nature of the brain: how primed it is to recognise, interpret and respond all the time to the input of others and how that lays down patterns which govern our behaviour. We are herd-like animals who show a strong tendency to conform with group norms; what makes our brains so much bigger than other primates is this remarkable capacity for social skills such as empathy, co-operation and fairness. Instead of the old metaphor of individuals as discrete entities like billiard balls, we need to think instead of them as nodes in a relationship network.

The second area of astonishing discoveries is in the plasticity of the brain. We talk of "hardwiring" (computers have generated many misleading metaphors for the brain) but in fact, the brain can be changed. Parts of the brain can learn entirely new tricks. Neural pathways are not fixed, and even much of the damage done by deprivation in childhood can be repaired with the right circumstances of example, support and determination. We can shape our own brains to create new habits that we might have thought we were not capable of – it's a long, hard process but it is possible.

This all may seem remote from politics, but it's not. Jon Cruddas has a habit of startling audiences by arguing that the regeneration of the left requires a convincing new account of what it is to be human. Are human beings self-interested creatures or are they collaborative? The right's argument for market capitalism is rooted in the former but the research on the social brain supports the latter. Put crudely, we are social creatures with an inbuilt tendency to co-operate and seek out each other's approval and that is probably more important in determining day-to-day behaviours than narrowly conceived self-interest.

In a thought-provoking pamphlet on the implications for politics to be published early next month, Matt Grist, who runs the RSA's Social Brain project, concludes that both the right and the left have lessons to learn. The rightwing emphasis on the individual's capacity to triumph over their environment through willpower is undermined by the research which shows how childhood deprivation leaves such scarring on the brain. While the challenge to the left is to recognise that the myopic tendencies of the brain to privilege the short term has been held in check by institutions and traditions which can safeguard longer-term interests. Perhaps that requires greater understanding on the left of how such institutions operate and a revision of assumptions about why they restrict individual autonomy.(emphasis mine)

So, to summarize--and obviously, the facts are in, the scientific debate in this area, like that of man-made global warming, is over--individual responsibility is OUT; the nanny state is IN.

As one commenter to the article notes, "Fascists everywhere are going to love this...."

How convenient all this is for the left to have "scientific evidence" that the ultimate "enlightenment" for the human species is to evolve into the Borg!

My hapless little brain can't help wondering though, about all those compassionate and loving individual leftists jockying for control over the very institutions that "safeguard our longer-term interests" (read: do what's best for you even if you don't think it is). What about their lack of decision-making skills? Aren't they "lazy, imitative, over-optimistic, myopic" with "much of [their]decision-making..made by unconscious habits of the mind which are largely socially primed" too?

Or, are some individuals just more equal than others in this new "enlightened" animal farm?

Next thing you know, there will be a law (with "scientific" evidence to support it!) that prohibits the use of the word "I" because of its antisocial connotations. The individual is a mere "illusion" and the advancement of the species requires--no demands!--that we eliminate such unscientific ways of thinking.

Wasn't it Barack Obama (the most enlightened man in history--next to Jesus presumbably)who recently reminded us all that we are our brothers' and sisters' keeper? That it is our ethical and moral obligation (and the most correct way for our brain to operate) to pass some sort of socialist health care reform? 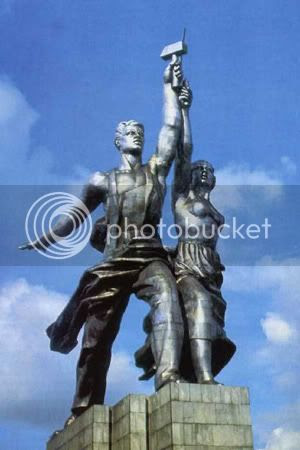 So, comrades, prepare yourselves for the new Enlightenment!

Which is actually not that different from all those wonderful "enlightenments" of the last century that resulted in the misery and death of millions of individual humans in the various leftist utopian gulags of that age.
Posted by Dr. Sanity at 7:59 AM