On February 16, last year's bipartisan legislation governing the collection of foreign intelligence and protecting from liability all persons who comply with federal directives to assist in such collection--the law otherwise known as the "Protect America Act of 2007"--expired, having exhausted its six-month, 15-day statutory lifespan. At which time the federal government's ability to pursue suspected terrorists and emerging threats was dealt a serious blow. You can thank House Democrats for the whole sorry mess.

The Democratic leadership denies this, of course, having adopted an Alfred E. Neuman "What, Me Worry?" approach to national security. The lack of a new statute "does not, in reality, threaten the safety of Americans," protests Senate majority leader Harry Reid....

This demonstrates a fundamental lack of seriousness about national security on the part of congressional Democrats. Newsflash: The United States faces a persistent threat of attack from a terrorist organization with global reach and the desire to massacre as many innocent people as possible. Do House Democrats really want to make the terrorists' jobs any easier?

Well truthfully, they don't really care about the terrorists' 'jobs' as long as they have job security--and the White House.

Whew, that was a close one. We suffered a big attack and were in mortal danger for a while, but we are safe now. Thank God, the war on terror is over. There are no Islamic extremists. Homeland security is not an issue. The only problem in Iraq is how to get out.

Wait, this is news to you? Then you didn't watch the Democratic debate Thursday. Or maybe you did watch, but since those unpleasant topics were completely or mostly ignored, you assumed the war was over and went to bed believing peace is at hand and Santa Claus is busy making toys at the North Pole.

It's not your fault. It's the Democratic presidential candidates who are sleepwalking through history....

While Bush's flawed handling of Iraq is a main reason, the unwillingness to separate his failure from the overriding truths of the continuing terror threat will come back to haunt not only Democrats, but the nation.

Consider that what was once called a generational war against an existential threat is now by unanimous consent of the candidates only a misguided Republican war in Iraq that must be ended immediately. What was once a bipartisan concern about the new phenomenon of lethal nonstate actors such as Al Qaeda has been reduced to denunciations of waterboarding and attacks on the Patriot Act.

We scanned the transcripts of Saturday's debates hosted by ABC News and tallied up the references to Islamic terrorism. The rhetorical divide between Democrats and Republicans on that score alone — ignoring the yawning gaps in policy — is stunning.

None of the four Democrat presidential candidates — despite running for an office that demands they lead the ongoing global war against Islamic extremists — could bring himself or herself to define the enemy we face as Islamic.

Their combined references to "Islam" or "Islamic" totaled zero — even though moderator Charles Gibson prompted them with a question about "Islamic radicals" threatening the U.S. with nuclear terrorism.

But Democrats refused to go there.

That's because to "go there" would force them to acknowledge some painful realities that they are not capable of dealing with.

Then there's this article, in which the LA Times re-starts the meme about how Bush supposedly "exaggerates" the intelligence that will be lost from the Dems failure to enact the reform bill--undoubtedly so they could "speak truth to power" and stand against the usual "fear and warmongering" of the Bush Administration. Andy McCarthy of The Corner has this to say:

The impression, of course, is that the administration overstated its case that the intelligence community has lost information due to the shameful failure of House Democrats to enact the intelligence reform bill that passed the Democrat-controlled Senate by an overwhelming bipartisan margin. If one reads what was actually said, however, it's obvious that that's not what happened.

Read his entire discussion to understand how the Administration is actually sounding an alarm that neither House Democrats nor the Los Angeles Times seem to want to hear.

You could interpret all this behavior as symptomatic of a combined hysterical blindness, deafness and dumbness--but it is far too perverse and immutably out of touch with reality for it to be a simple neurosis. What we are witnessing is a collective cognitive catatonia that has makes the Democrats completely irrelevant in the 21st century.

Catatonia is a state of apparent unresponsiveness to external stimuli in a person who is apparently awake; and perfectly describes the present state of the Democratic party and its leftist base.

The first signs of this dysfunctional collapse were clearly evident during the Clinton Administration: 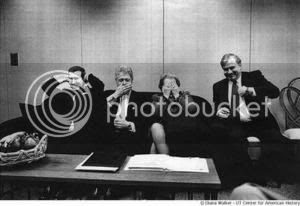 As reality becomes even more threatening, the process has accelerated to a ludicrous degree--witness how the Democrats in Congress aggressively pursue an agenda to keep the American people safe...from the terror of professional baseball players who use steroids:

And, after this country is attacked again by the Islamic jihadists who have every reason to believe that the U.S. is still a paper-tiger, the terminal phase of the dysfunction will begin when these same Democrat denialists shamelesly dance around to avoid any responsibility for the consequences of their inaction; and instead, will find numerous excuses to Blame Bush, Blame the Republicans, Blame the Military, Blame Business--anybody but themselves and the failed ideology they worship.

But it will be too late for them--and unfortunately, the rest of us--by then.
Posted by Dr. Sanity at 7:08 AM