THEY'RE ONLY DOING IT FOR OUR OWN GOOD !


“Of all tyrannies, a tyranny exercised for the good of its victims may be the most oppressive.”--C.S. Lewis 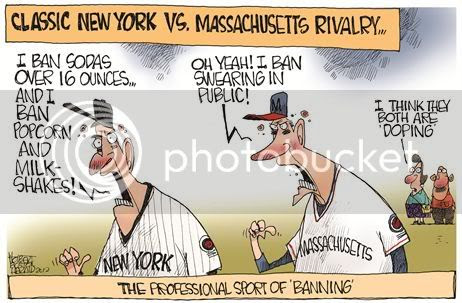 It must be such fun to be one of a growing class of politicians that I will refer to as "postmodern busybodies"!

Imagine, if you will, the heady sense of power over others that comes with the job. You even get to tell people what to eat!

This behavior is nothing more than a bit of annoyingly intrusive narcissism displayed by a variety of politically postmodern progressive individuals and groups, whose goal is not to persuade you that their ideas are correct or even better than yours; but to force you to accept their ideas by make them laws.

We used to contemptuously call such people busybodies (which was not a compliment), and were mostly able to ignore their nitpicking power plays to control or change our lives.

Sadly, we can't do that anymore.

These a$$holes are everywhere. They are in the Democrat and Republican Party (but mostly the former); they are in the chattering classes and media; they are the elites of Hollywood.

We listen to their advice on everything from what car to buy to what deodorant to wear.

Mathhew Yglesias over at the busybody blog called "Think Progress" (actually, don't think at all--they always know what's best for you) thinks that the "trouble" with America is that we don't give our children good enough school lunches.

We give them Pizza. Oh the horror! Clearly this is the reason America is in decline!

I mock them, but Yglesias and his progressive compatriots are true believers in the soft, compassionate tyranny of the nanny state.

Their touching confidence that the government will keep us all healthy and safe from the evils of the world (or, at least the evil of pizza for lunch) is amusing, albeit misplaced. We can laugh at Yglesias because he is merely an impotent jerk.

But his kind of busybody do-goodism is rather less amusing when it emanates from the people who are currently running our government at the local, state and national levels.

Most congresscritters, be they Democrat or Republican, have never met a government program they didn't like, as long as it helps them get elected or re-elected. “Promise the Suckers Anything!” (Suckers=Us). And, of course, human nature being what it is, every single one of us are enthusiastically willing to take something when it is promised to us for nothing.

But, their ready and contradictory promises aren’t without consequences. And, they cost somewhat more than nothing.

There are two problems here. The first is how we the people casually shrug off any personal responsibility and abdicate our self-reliance and freedoms. If we do it often enough; eventually we will develop an enlarged sense of entitlement to other people's money and effort. Soon we will be caught up in aggrieved victimhood, when the gravy train stops. If you doubt this, then wake up and take note of what is happening in Europe today (and watch carefully the results of the Greek election). In EU fantasyland, people demand that everything go on as usual and that they continue to receive what was "promised" to them by their own self-absorbed and anti-reality politicians.

NOTE: Pretending that the real world doesn't exist is rather infantile—and completely narcissistic.

The second problem is the (supposedly) grown-up narcissists we the people elect to Congress who do the promising, and then refuse to face either external reality (we are going broke and running out of other people’s money to pay for it all) or internal reality (they glory in the power they have over us AND, amazingly, they always profit mightily from it).

Another example of narcissism for fun and profit in the 21st century.

From regulating and taxing the gasoline that goes into your car and the emissions that come out; from state seatbelt laws; all the federal warning labels on cigarettes (the new requirements are absolutely horrifying literally and figuratively 54, all anyone seems to want to do anymore is to micromanage everyone else's behavior.

Local school districts ban dodge ball and tag; ban peanuts from school; Congress mandates what kind of light bulbs to use; what drugs are legal and what drugs are not; whether you can gamble or have church services in your own home.

There is no end to what these postmodern busybodies try to control about your life and your choices. And the farther up the government food chain you go--from the local level to the federal level--the worse it gets.

Ironically, these are the same people who are presumably "pro-choice" and champion "abortion rights" and a Woman's right to choose, arguing that, since it is her body, she gets to kill the fetus if she doesn't want it. But never mind all that when it comes to athletes who want to use performance enhancing drugs. Isn't it their body? So what if I want to "defile" my body by eating pizza with 16 oz sodas for breakfast, lunch and dinner?

Ahhh, they smile happily. You gave up that right when you told us you wanted the government to manage health care. When you shirked your responsibility to take the consequences of your behavior. Now WE have to control that behavior! Of course, we'll do a much better job of it than you would anyway.

Yes, these crusaders for peace and social justice and bans on cigarettes are everywhere, but they are scariest when we ourselves give them the power to make us into children and act out their parental fantasies for our own good.

Take Nanny Pelosi, whose every action is loudly proclaimed" for the children!"—or, so she tells us. Her latest gambit is to “do for childcare what we did for healthcare.”

Soon, no child care provider will be safe from her intrusive, busybody nanny-statism.
Or, take Barney Frank (please), whose sincere devotion to social justice when he was overseeing Fannie Mae and Freddie Mac directly led to the housing crisis. Now, of course, he claims it was all the Republicans’ fault because they didn’t stop him from his madness.

In a rational and yes, a "just" society, these busybodies would be laughed at. In a society that valued self reliance and personal responsibility, they would rightly be considered idiots.

[NOTE: I am currently extremely busy and don't have a lot of time to post, so I am recycling an earlier post on this topic, "Sugar Daddies and the Mommy State"] Hey! If the President can recycle his speeches....
Posted by Dr. Sanity at 12:55 PM

As Sir Walter Scott wrote in Canto VI, Stanza 17 of “Marmion” (1808): “Oh what a tangled web we weave when first we practice to deceive”.

I would add: “The more you practice to deceive, the more tangled the web.”

I suggest this tangled web is being created by willful intent and purpose. The hope is that when the web becomes sufficiently tangled, We the People will give up and accept the rape of our rights and our lives rather than do the work necessary to untangle the web of deceit.

Fortunately there are those among us who value their rights and their lives enough to do the work. The prize is well worth the effort and nothing less than full restitution of our rights and lives will suffice.

He who is free, never submits. He who submits, was never free. Stay free!

As Sir Walter Scott wrote in Canto VI, Stanza 17 of “Marmion” (1808): “Oh what a tangled web we weave when first we practice to deceive”.

I would add: “The more you practice to deceive, the more tangled the web.”

I suggest this tangled web is being created by willful intent and purpose. The hope is that when the web becomes sufficiently tangled, We the People will give up and accept the rape of our rights and our lives rather than do the work necessary to untangle the web of deceit.

Fortunately there are those among us who value their rights and their lives enough to do the work. The prize is well worth the effort and nothing less than full restitution of our rights and lives will suffice.

He who is free, never submits. He who submits, was never free. Stay free!

"Busybody" is exactly the right word.

It used to be the case that people were taught in their churches to inspect their consciences and try to correct their own sinful ways. In a nation of extroverts and one in which traditional authorities are now mocked, people learn to inspect the behaviour of others and then they make laws to correct the others' behaviours.

These busybodies end up being hypocrites because they correct others but not themselves. In such a world, how does a culture change itself to go back to having people develop a bit of introspection?

A large minority, and perhaps a slight majority, of Americans have elected to exchange liberty for submission with benefits. It would have been commendable for those individuals and cooperatives with "good intentions" to warn people of the necessary tradeoff, but they didn't. We are reaping what was sown through willing and often eager acceptance.

They never did qualify their concept of "progress." Unfortunately, the problem rests with the generational progressives, and the liberals who dream of instant gratification without consequence. Fortunately, with each generation there is an opportunity to reaffirm individual dignity and an attendant requirement for self-moderating behavior. There is evidence that we have reached that apogee.

Is not a sign of being adult taking responsibility of one's own actions? The narcissist believes, sincerely, and wrongly, that his ideas are better than yours and that you are only a child, either intellectually or materially, and therefore "need help". Ick.

Where is the common sense? Of course, there is a phrase for this, "social engineering" and if one reduces a populace to children, one has complete control.

Once we give up rights, we never get them back. Keep writing for our sanity, please.

Daddy, how and when did you and mommy become slaves?

If the Republicans don't start shouting out to all Americans that this president is "evolving" into our first ever "Dictator" then with Obama-Mao's "passive aggressive" moves becoming even more frequent and severe, he will outplay all of his serious opponents, including Romney...bringing about his notion of America:

We being the new "bond slaves" and he along with his "bros" the new "enlightened masters" of us all!

The Nazis were also fanatics about public health. It's the creeping Nazism of the nanny state.

>>> Her latest gambit is to “do for childcare what we did for healthcare.”

Eph it up royally?

These nanny state battles over things like school lunches and sodas that narcissistic politicians engage in are perfect examples of the displacement phenomenon you described recently, where people manage trivail matters at the expense of important ones. Displacement at its worst.