TENSE TIMES FOR THE NARCISSIST IN CHIEF AND HIS STAFF

I am perfectly willing to give Obama a significant amount of credit for authorizing the kill on Bin Laden. But please, enough is enough.

Why is HIS bravery; HIS gutsiness in the face of danger; HIS part in this operation being so overly emphasized and overplayed???

Did you know that Navy SEALs were also involved?

According to another one of those White House briefings of reporters designed to suck up all available credit for good news, President Obama's homeland security advisor reveals that it was a really tense time in the air-conditioned White House as unidentified U.S. Navy SEALs closed in on the world's most wanted man after midnight a half a world away.

The heavily-armed commandos flying in a quartet of darkened Blackhawk and Chinook helicopters more than 100 miles into Pakistan were probably listening to their iPods and discussing the NFL draft.

"The concern was that bin Laden would oppose any type of capture operation," said Obama's Sherlock Holmes. So U.S. troops were prepared "for all contingencies."

In fact, this weekend was such a tense time in the White House that Obama only got in nine holes of golf. But he still managed to deliver his joke script to the White House Correspondents Assn. dinner Saturday evening.

Sunday was, Brennan revealed to his eager audience, "probably one of the most anxiety-filled periods of times in the lives of the people assembled here." Poor poor bureaucrats. Extra Tums all around. Did someone order dinner?

And look! The only picture released from that "tense time" is this one: 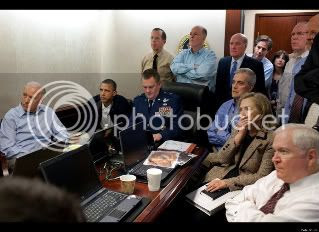 Tense times indeed for the Narcissist in Chief and his staff.

Could we get a glimpse of the REAL heroes in all this do you think?
Posted by Dr. Sanity at 6:39 AM