The White House had no problem declaring a "mission accomplished" today with reports of the creation of new jobs:

U.S. private employers shrugged off high energy prices to add jobs at the fastest pace in five years in April, pointing to underlying strength in the economy, even as the jobless rate rose to 9.0 percent.

Private sector hiring, including a big jump in the retail sector, boosted overall nonfarm payrolls by 244,000, the largest increase in 11 months, the Labor Department said on Friday. Economists had expected a gain of only 186,000....

The White House welcomed the report, which it said was a sign the jobless rate would soon recede.

I hope they're right, but they keep saying things like that; gloating almost when any statistic gives even the mereist hint of a suggestion of a possiblity that the dark days of the economy are over.

Nevertheless, in spite of the addition of these jobs, the jobless rate remains high at 9%.

Then there's this little reality check to consider...

The good news is that the economy added about 268,000 new jobs. The bad news is that 25 percent (62,000) were from McDonald’s. That’s honorable and respectable work, of course. But consider this: Had the Obama administration not granted McD’s a waiver from having to abide by the law, it might not have added all those workers. And if the company had added the jobs anyway, they all would have been jobs without health insurance since the company was going to stop providing benefits without the waiver.

And, Peter Kirsanov has a question for Brave Sir Robin:

Today your administration announced that the unemployment rate is 9 percent.

Why didn’t that $800 billion work as promised? How much more do you contend you need to spend to get the unemployment rate down to 6.5 percent? 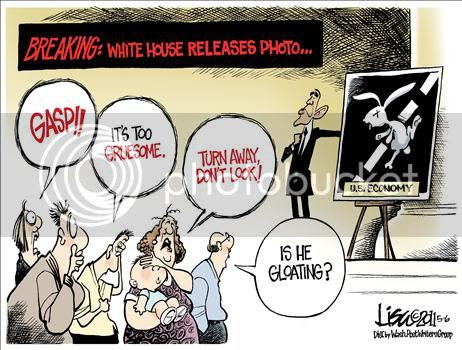 [Political cartoons by Lisa Benson]
Posted by Dr. Sanity at 9:41 AM