This op-ed from Heather Wilson is interesting as a follow-up to my post on "Bringing Forth Monsters" and how today's postmodern educational system is creating non-thinkers:

For most of the past 20 years I have served on selection committees for the Rhodes Scholarship. In general, the experience is an annual reminder of the tremendous promise of America's next generation. We interview the best graduates of U.S. universities for one of the most prestigious honors that can be bestowed on young scholars.

I have, however, become increasingly concerned in recent years - not about the talent of the applicants but about the education American universities are providing. Even from America's great liberal arts colleges, transcripts reflect an undergraduate specialization that would have been unthinkably narrow just a generation ago.

As a result, high-achieving students seem less able to grapple with issues that require them to think across disciplines or reflect on difficult questions about what matters and why.

Unlike many graduate fellowships, the Rhodes seeks leaders who will "fight the world's fight." They must be more than mere bookworms. We are looking for students who wonder, students who are reading widely, students of passion who are driven to make a difference in the lives of those around them and in the broader world through enlightened and effective leadership. The undergraduate education they are receiving seems less and less suited to that purpose.

An outstanding biochemistry major wants to be a doctor and supports the president's health-care bill but doesn't really know why. A student who started a chapter of Global Zero at his university hasn't really thought about whether a world in which great powers have divested themselves of nuclear weapons would be more stable or less so, or whether nuclear deterrence can ever be moral. A young service academy cadet who is likely to be serving in a war zone within the year believes there are things worth dying for but doesn't seem to have thought much about what is worth killing for. A student who wants to study comparative government doesn't seem to know much about the important features and limitations of America's Constitution.

When asked what are the important things for a leader to be able to do, one young applicant described some techniques and personal characteristics to manage a group and get a job done. Nowhere in her answer did she give any hint of understanding that leaders decide what job should be done. Leaders set agendas.

I wish I could say that this is a single, anomalous group of students, but the trend is unmistakable.

What Wilson is describing are the inevitable consequences of a philosophy that celebrates moral relativism and encourages nihilism even as it discourages rational thought. The philosphy is postmodernism.

These college students are the poster children of progressive postmodern intellectual 'thinking'; steeped in the political correctness of our day; marinated in the metaphysics and epistemology that are the foundation of its moral relativism. They go to college to learn to think and instead learn how not to. They believe in nothing and stand for nothing. They are taught to mindlessly mouth the same old tired and worn self-serving platitudes of a defunct and dangerous world view.

Here is more information to absorb, if you are not convinced of the dead-end intellectualism of today's postmodern thinkers (and read Zombie's entire essay and how he gets to this conclusion):

It’s not that the essay’s author, former New York Times Bureau Chief and current anti-imperialist professor-activist Stephen Kinzer, is wrong about his facts: it’s quite true that life under a totalitarian police state is often safer and more secure than living in lawless anarchy. That’s why the war-torn masses throughout history sometimes clamor for peace even at the cost of their own freedom. Yet forgotten in Kinzer’s approval of oppressive societies is that wannabe dictators always use this excuse to justify their crushing of human rights: We need to remove your freedom in order to guarantee your safety. Never mind that the new regime was usually one of combatants endangering the citizenry in the first place.

No, the issue is that Kinzer seems to have just now woken up to a phenomenon that many of us have known about for quite some time — that the human rights movement “has in recent years become the vanguard of a new form of imperialism.”

The only error in that statement is the word “recent.” The notion of “universal human rights” was formulated in the West and is the basis of Western civilization; and the the notion of bringing these “Western values” to oppressed and backward peoples has been the goal not just of the modern human rights movement but of missionaries, do-gooders and yes, even the American military for quite some time.

Kinzer has freshly arrived at the blinding and quite correct realization that the “human rights movement” and “Western imperialism” are one and the same. And having become aware of this, you’d think that as a human rights activist, he’d have a life-altering epiphany: Perhaps I’ve been wrong about what I call “imperialism” this whole time. Maybe it is a force for good after all.

But no. Standing on the brink of a psychological breakthrough, Kinzer turned the other way and instead had a breakdown. Pinioned by the idée fixe that America and imperialism and Western values are always and irrevocably wrong, when faced with the fact that human rights are a subset of Western values, Kinzer felt he had no choice but to discard his belief in human rights. Which must have been quite difficult for someone who formerly regarded himself as a human rights activist, but hey, ya gotta do what ya gotta do.

This is why you can't argue with that biochemistry major who wants to be a doctor and supports Obamacare. Supporting shit like this is WHAT YA DO--if you want to describe yourself as a "caring, compassionate person". You can't even debate the issue with him or with the person who thinks the great powers should give up nuclear weapons--I mean, who cares about the practical, real-world outcome of that? RHETORIC is more important than reality. FEELINGS are more important than reality (in fact, they are obviously the ONLY reality to this generation of 'leaders' and 'thinkers'). GOOD INTENTIONS always seem to trump how things actually work out in reality.

Jonah Goldberg calls this the "decline of leadership."

As depressing as that is, the reality is more than that.

I think we are witnessing the consequences of having the best minds of several generations systematically hobbled and and mutilated by the gurus of political correctness and moral relativity. I think that the essential nihilism of the postmodernism intellectual craze is coming to full fruition and that the decline of leadership is just one obvious symptom. Even more insidius is a steep decline in the ability to think that is coupled with a real contempt for reason, truth and objective reality.

Joseph Stalin once pointed out that, "Education is a weapon whose effects depend on who holds it in his hands and at whom it is aimed.”

Our children have been deliberately targeted for decades; they have been in the crosshairs of the dead-end philosophy that drives the postmodern progressivism of today's 'intellectual' elites. Sadly, those elites have scored a bullseye.

No, there are no psychological breakthroughs on the horizon for these reality-challenged minds, or for their mentors. There is only the mindless parroting of the dysfunctional ideology for which they have gladly sacrificed their souls.

But hey! Ya gotta do what ya gotta do! 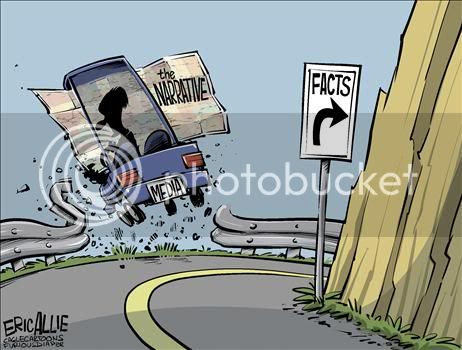