IMPROVING OUR RELATIONS IN THE WORLD ?

I don't think so.

"The astonishing disregard with which Mr Obama treats Britain has been made clear by his deliberations over the Afghan issue. As he decides how many more troops to send to Afghanistan — a decision which will fundamentally affect the scope of the mission — Britain is reduced to guesswork. The White House does not even pretend to portray this as a joint decision. It is a diplomatic cold-shouldering that stands in contrast not just to the Blair–Bush era, but to the togetherness of the soldiers on the ground... There will, though, inevitably come a time when Obama discovers who America’s true friends really are. Sooner or later he will have to deal with the considerably more taxing issues of Islamist militancy, rogue nuclear states and other tangible threats to the West’s security. At that point, Obama will discover a simple but essential truth. The world divides between those who support American values of freedom and democracy, and those who seek to destroy them. Few nations have been more committed to supporting those values with both blood and treasure than Britain. This country, and especially those British troops fighting alongside their American counterparts, deserve far better than this president’s disregard."

All Obama has done is ingratiate himself and us to tyrants and offend important allies. This goes by the name of "smart" diplomacy. Must be some new meaning of the word "smart" that I've never heard of.... 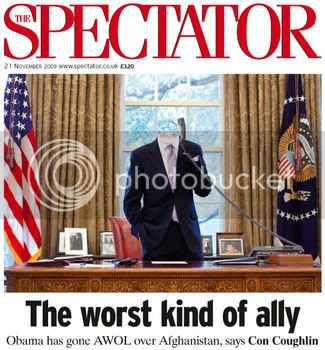 Could somebody please give this guy a clue?
Posted by Dr. Sanity at 11:27 AM