HYPOTHETICAL ATROCITIES AND HYPOTHETICAL VICTIMS: Psychological Displacement and the Fierce Urge to Be Politically Correct.


I must agree with Mark Steyn on this insanity:

The Headline of the Day, from the BBC:

Shooting Raises Fears For Muslims In US Army

Really? Right now the body count stands at:
Non-Muslims 13
Muslims 0
I was reading from some of this kind of coverage on the Rush Limbaugh show today. Even if you take the view that it would be grossly unfair if all Muslims were to be tarred by Major Hasan's brush, it is, to put it at its mildest, the grossest bad taste to default every single time within minutes to the position that what's of most interest about an actual actrocity with real victims is that it may provoke an entirely hypothetical atrocity with entirely hypothetical victims. I refer you yet again to this note-perfect parody:

This kind of media coverage is really a form of mental illness far more advanced than whatever Major Hasan's lawyers eventually enter in mitigation, and apparently pandemic, at least among the western media.

On a related note, from David Horowitz: "Is everybody out of their mind?"
Bonus: "We're the ones who love death - our own."

However, I would disagree in that this is not formal mental illness; though it is insanity. It is more precisely called an severe neurosis, a term that has gone out of favor in contemporary psychiatry, but which very adequately describes the kind of thinking that runs rampant in these days of political correctness--a form of deranged thinking designed to protect the individual from the awareness of imminent danger (think of the paralysis of deer in headlights). Specifically, it is a type of neurotic defense mechanism that serves to deny reality; and I have talked about it many times on this blog.

Displacement: The separation of emotion from its real object and redirection of the intense emotion toward someone or something that is less offensive or threatening in order to avoid dealing directly with what is frightening or threatening

Here's are two cartoons that describe the pathology exactly: 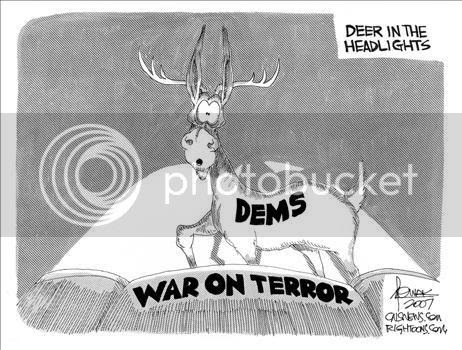 [other cartoons by Paul Nowak here)

(BTW, though I am really busy getting ready for the move and doing extra work before I leave Ann Arbor, I will, from time to time, put up a post when I can't stand to be silent about events. My sincere condolences to the Ft. Hood victims and their immediate and extended families.)
Posted by Dr. Sanity at 7:19 PM