I am going to be taking a break from all the political insanity until the first of the year.

The next four years will be challenging to say the least. It looks like our hapless vice-President elect was absolutely correct, (except that he was off by a mere 4310 hours too long) about how quickly our enemies would seize the opportunity to test out the scary appeasement strategies of the President-elect.

Vanderleun collected the various "tests" that were promptly (and probably laughingly) issued to "O" within 10 hours of His ascension:

It would seem that some people just don't know the difference between November and January:
Stocks fall as investors ponder Obama presidency

Iran army warns US forces to steer clear of borders

Russia to move missiles to Baltic

Perhaps George Bush, as a parting gift to an ungrateful nation, could remind them.

If you thought things were insane over the last eight years, just wait until the Obamaniacs/inmates officially take over the asylum on January 20th.... (of course, I am assuming that they don't let their messianic fervor overcome their steady baseline dysfunctionality--but perhaps even that is too much to hope for these days).

I'll need to be well-rested and armed with all the latest diagnostic and therapeutic tools to deal effectively with the expected "surge" of political psychopathology. While the leftist hysterics are busy with their destructive agenda:

We conservatives will have to remain: 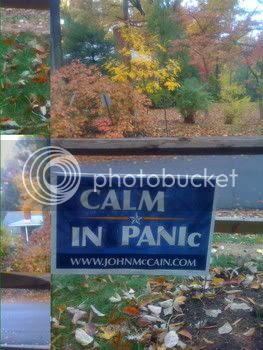 **Unless you happen to know a way to make blogging financially worth my while-- in which case I might come back sooner....